Kids on boring car trips used to play a game of looking out for a designated and usually uncommon item — like a purple car, or a Palomino horse — and ‘Spotto!’ you’d yell if you spotted one.

If you read my excited posts about my several sightings of a lone White-headed Pigeon, you can imagine what a treat it was for me to spot three of them.

They were perched on a tree on the island in the middle of my big dam — well, it’s actually two dams sharing the island and the outlet. Spring-fed, below it is the main regenerating rainforest gully.

These are rainforest-dwelling birds; have they taken up residence now it’s becoming more attractive to them?

And why does only one visit the house? 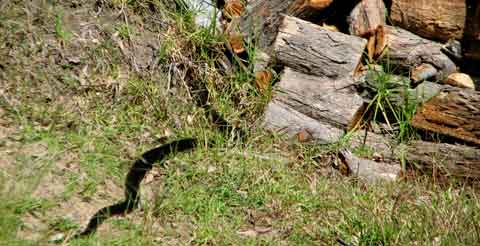 A few days later, a less welcome sighting — and much nearer the house.  As I was coming down the steps I spotted a medium-sized red-bellied black snake sunning itself  by the bank.

By the time I had the camera in hand, it was oozing in under my firewood heap. And not as slowly as I’d have thought, or wished, it being Autumn.

Does it live there? In which case, under advice, I have placed a long-handled rake nearby for dragging logs out. But every time will be nerve-racking; and has it always been there as I reached in barehanded?

My adviser says it will have been watching me, so just carry on as normal.

Since then I have been watching the woodheap and I haven’t seen the snake again, but I will never again be complacent about bringing in the firewood.