Now that the rain’s stopped, my yard is a sheltered sunspot for the wallaby population, which seems to have exploded.

I guess they give the kikuyu grass more attention now that it’s winter and there’s not a lot happening elsewhere, growthwise.

This morning they seemed as ‘herded’ and as focused on the task as a mob of cattle grazing. 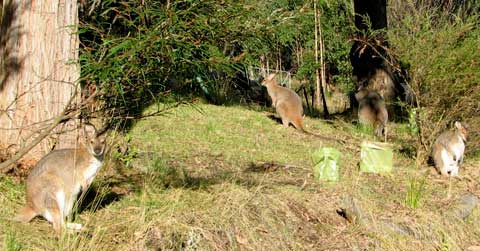 The hillside is still seeping moisture so there aren’t many dry spots but this lot sensibly chose a higher bank. Two were drying off and warming their fronts, and two their backs, just as we would in front of a fire. Eating grass was not the purpose here.

There’s been a lot of wooing going on lately; much grunting and chasing and sniffing. One male nearly knocked me over yesterday as he belted past after a female. Desperate days to see which best man wins, but so far the ladies are all saying ‘no’.