A chilly early morning at Goulburn River Stone Cottages, the moon still high in the sky and the three peacocks still perched in their night-time tree. 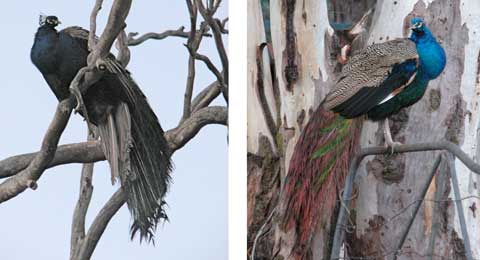 They are ridiculous birds for flying or perching, one would think, with their disproportionately long tails and heavy bodies.  There are three show-off males here, two ‘peacock blue’ and one white, and a silent white female, with a shorter tail. She roosts down lower to the ground by herself.

These ridiculously gorgeous birds hide their brown and white wings under the iridescent finery. The back and tail feathers are amazing, bronze in some lights, green in others, and their shimmering chest plumage must have been the inspiration for velvet, shot silk and shantung fabrics. 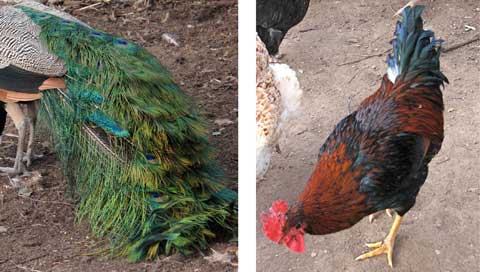 They wander about, cocking their coronets, dragging those painted eye tails in the dirt, and flashing their pale pantaloons.  The blue ones were spending part of the day sitting on the sunwarmed roof of my blue ute parked in the open shed — until I realised they were covering it with large droppings. The ute is now parked out in the open; I hope they drop me a few tail feathers as compensation.

They get some of the chooks’ breakfast and afternoon tea feeds, sharing it with the blow-ins — the currawongs, choughs, wood ducks and plovers. The chooks here are of many different colours and patterns, but the roosters are — of course — the most spectacular. 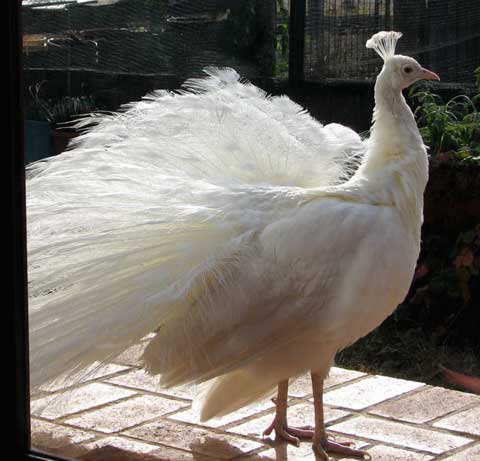 The white male likes to promenade up and down the sunny brick verandah of the house, looking in the large glazed doors.  I assume it’s his own reflection he fancies. I have to remind myself it’s not a female, so like a bedraggled and rather hung-over bride does he look!  A tiara never looks right for day wear — but then all these peacock males live in evening wear.

Like kids playing dress-up in Mum’s old satins and furs — in the sandpit.