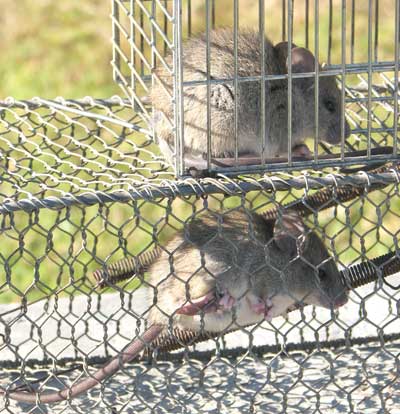 For weeks I’d been trying to find and block every hole where a bush rat had been getting into my cabin.

It tunnelled anew under the rock and cement footings each night. It gnawed plastic, seeds, photo albums and – unforgivably – books.

It had to go. I borrowed a live trap big enough to take the critter I saw race along the same rafter each night.

The friend lent me two so I set them both, using apple spread with peanut butter as ‘bait’.

Next morning I had two mini bush rats – ‘it’ must have been a ‘she’.

Quite cute for rats, but nevertheless they were relocated.

The next day I caught Mum. I was heading to Sydney that day so she rode with me to the spot where the kids had been ejected.

So for the next few days in the city it was not only the dried mud on the Suzi but the rat cage in the back that gave us away as bushies.