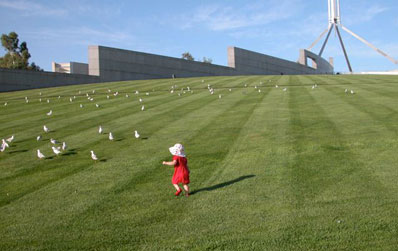 5% reduction won’t give her a future, Mr Rudd!!

Over 2000 people, wearing red, came to Canberra on February 3rd to link hands and red banners and tell Mr Rudd and Ms Wong that they have got it terribly wrong. 5% carbon emissions reduction will do nothing to halt our runaway global warming crisis.

If our ‘leaders’ haven’t yet joined the dots, maybe they’ve noticed the prolonged heatwaves in Victoria and South Australia and the floods in Queensland, with 75% of the state a declared disaster area.

Excessive heat or excessive rain – infrastructure and services like transport and energy have collapsed, and people are suffering.

Climate chaos is not good for the economy either, Mr Rudd. 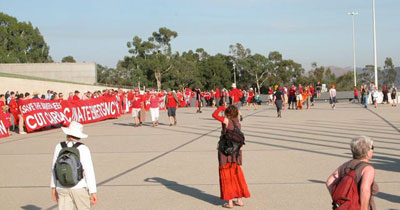 We went there on the opening day of Parliament to remind them this is a Climate Emergency, a red alert to act NOW. We were so many we encircled the block.

But our message was eclipsed by Mr Rudd’s announcement of his billions of dollars to ‘save the economy’. What a shame he didn’t use those billions to take bold steps to save the planet at the same time.

All he gave was a drop or two for home insulation. Instead of splashing spending money for consumables about, he could have installed a solar hotwater system in every household — for free.

With one stroke he could have boosted green industries, created jobs, reduced energy consumption and removed the need for any new power stations while renewables kick in.

Well, they will only do that if the government gets serious about supporting them instead of coal power.

Individuals and community groups, young folk and old (like me, below, in the red hat) felt strongly enough to travel from all states to show their extreme concern in a peaceful way. 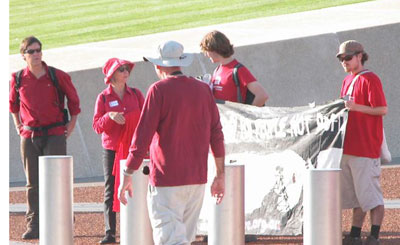 Giving money for schools  is fine — but saving the planet that those well-educated kids will need to live on would be a hell of a lot finer.

When will they wake up to this all-too-real emergency and act?

Thanks to Graham Brown for the photographs.