Taree is on the Manning River, downstream from Gloucester. Taree doesn’t have CSG or coal, but Gloucester has.

In a sane world the beautiful and bountiful Vale of Gloucester would not be even contemplated for these industries, but it has two coalmines, expanding, and a third, the Rocky Hill mine, proposed but being vigorously opposed, plus an approved AGL CSG project — equally opposed. 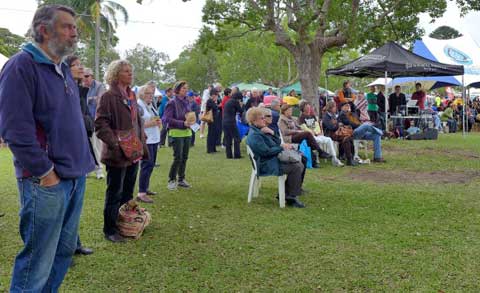 At the Taree Envirofair last Saturday, water was a big worry. Firstly, would the rain hold off? It did.

Secondly, how to alert Taree residents to the looming threat to their clean water supply if AGL’s fracking gas wells go ahead, with so little known about the aquifers with which they’ll be interfering?

Plus both coal wastewater and CSG produced water is contaminated and saline, and its disposal is always a hugely risky and still unresolved issue, especially in high rainfall areas.

Irrigating river flats with it doesn’t seem like a good idea if you want that river water to be clean. I think of this irrigating as simply a slower death by pollution than direct discharge into the river… 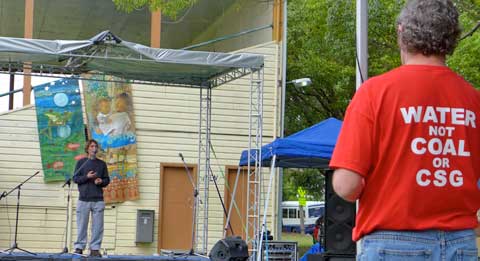 The Manning Clean Water Action Group’s stall (MCWAG) had plenty of folk signing petitions and gathering info, and their red-T-shirted members proclaiming ‘Water not coal or CSG’ were highly visible throughout the Fair. 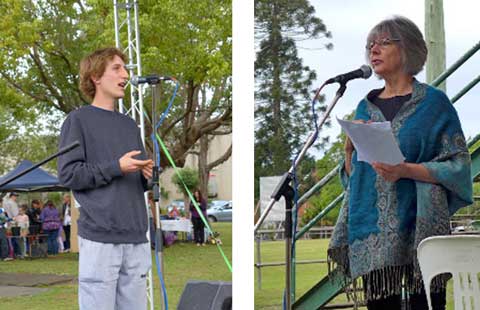 In between local entertainers, the Fig Jam stage was held by speakers like activist Jonathan Moylan (pictured), Chris Sheed from MCWAG, local solicitor Paul Lewers, Bruce Robertson (ex-Transgrid fighter from the Manning Alliance) and lastly, myself.

The message from us all was, in the end, similar: we are under grave and imminent threat of losing many precious resources like land and water, against the wishes of the people.

None of our governments are yet taking the threats seriously. So we, the people, must stand up, speak out — and make them!