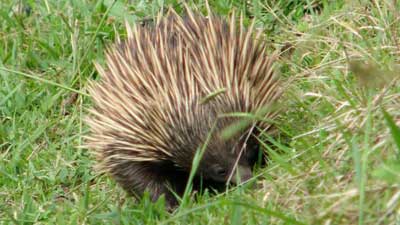 Last year I was delighted by seeing two quite different echidnas here at the same time. One had been in my yard, the other just outside it. One was big, one small, one dark, one lighter.

Lately I have had an echidna doing a very thorough job of poking into my whole house yard.  Each day I have seen it in a different area, getting about at a great pace. I have had to keep an eye out when sitting weeding for any length of time as it’s given me a few shocks by silently turning up quite close to me. I wouldn’t want to step on it!

It has golden brown spikes and medium brown fur and has been putting its snout into the air more than I’d seen before. 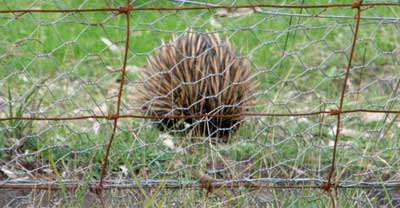 Perhaps the reason was the proximity of another echidna, as the other day, after taking some photos of my regular one, I spotted a darker one ambling along just outside the fence. It came under the gate and began its beat.

This one has darker reddish-pink spines and very dark ‘roots’ showing in between; the fur seems blackish rather than brown.

They kept their distance but traversed sections of grass well within sight of each other, seemingly having no problem sharing territory.
Seen together like this, their differences are obvious, and I have taken to calling my regular the blonde and the visitor the brunette.

So far the blonde has been the more conscientious, not missing a day aerating my damp ‘lawn’ whilst feeding.  The brunette, contrary to popular opinion, is more flighty, and comes and goes at will.