Victoria’s Latrobe Valley is coal power central, and very ‘dirty’ brown coal power at that, with its four power stations, all privately-owned, producing 33% more CO2 than ‘dirty’ black coal. See my posts Coal-powered clouds and Man-made murk from my 2010 visit there.

The oldest station, Hazelwood, alone produces 16 million tonnes of greenhouse gas emissions  — 15% of Victoria’s total. It was supposed to close in 2009; environment groups want it shut down now. Given that the best technology can do for the others is try to match black coal’s CO2  emissions, the Latrobe does not fit a low carbon future.

But the Latrobe workforce is dependent on coal and coal power jobs. Future-smart unions and workers in the Valley know this situation can’t continue, and are trying to establish transition industries that not only have a future, but positively help reduce our greenhouse gas emissions.

It starts with the Earthworker Cooperative — ‘Australian manufacturing: working our way out of climate emergency’ which will now be a permanent link on this site.

Organiser Dave Kerin’s been working towards a positive alternative with his Earthworker strategy, rather than the pointless opposition of jobs vs. environmental needs, for about 10 years, in one way or another. He had looked at the skills base in the Latrobe and sourced a product to which they could be applied, and which had a sustainable future growth market — a locally designed solar hot water system, ‘hotter, cheaper, all stainless steel, gas boosted’.  It will be called Eureka’s Future.

A key part of the plan is that the systems would be part of enterprise agreements, with the energy certificate rebates as incentives for employers — larger scale collective buying, larger scale manufacturing. Five percent of profits would go to social justice programs.

And yet they aren’t getting the government funding they need to start up – and they’ve tried – although the Federal government has committed $100 million and the Victorian government $50 million to HRL’s coal to syngas project.

They do have the firm support of two local manufacturers, Everlast (stainless steel hot water tanks) and Douglas Solar. 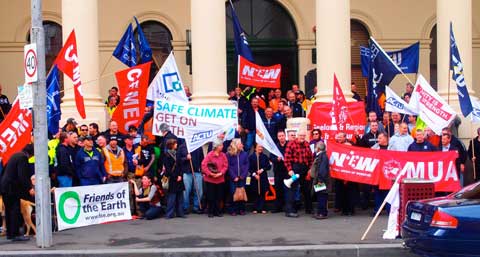 But they need money. So Earthworker has launched their ‘100,000 Australians Campaign’ to find 100,000 people to become members of the Earthworker Cooperative for $20 each, and to use the funds to establish the factory.

Their aim:  ‘To facilitate the establishment of manufacturing workers cooperatives through our country, especially in the coal regions of Australia, through membership of the Earthworker Cooperative.’

We all know that the planet is in trouble from global warming, and we all know that Australian manufacturing is in trouble. Jobs and profits stay here, and have a future, with projects like this. If our government won’t support workers offering them a non-confrontational and clever solution, we the people, must.

We urgently need such transition industries as Eureka’s Future to help coal-dependent regions like the Latrobe and the Hunter and Lithgow be part of the solution  — not just bear the brunt of it.

This is a movement we all need to foster and grow; visit the Earthworker website and read more.