On the Liverpool Plains near Quirindi, New South Wales, local farmers at Caroona have been defending their properties from invasion by BHP Billiton’s coal exploration drillers.

For 615 days, until Thursday 25th March, they have inspired coal-threatened communities everywhere with their blockade, by saying ‘No’ — and meaning it. 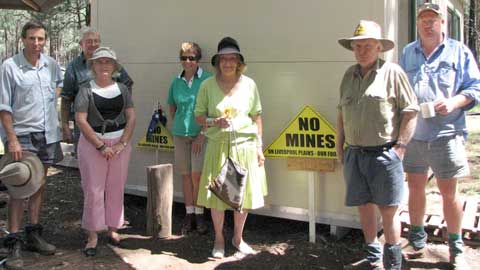 Trish Duddy and Tommy and George Clift (front L to R, all hatted) have been at the blockade camp every single one of those 615 days, joined by other locals on a rolling roster for cups of tea, information swapping, resolve steeling — and symbolic trailblazing.

The drillers had government permission in the form of an exploration licence but these farmers did not agree to access because they have strong and reasonable fears that any drilling through their precious aquifers could cause contamination or loss of the water on which their highly productive grain cropping depends.

Recently the Supreme Court quashed the Mining Warden’s decision where ‘access agreements’ were imposed on two Caroona properties. The access agreements were declared null and void because BHP had failed to notify the mortgagees for the properties.

It was the the first victory for the Brown and Alcorn families in an almost two-year battle to keep BHP Billiton off their land. The ruling could set a precedent that voids every access agreement in the exploration licence area and across the state.

So the blockaders have won a major and significant battle, but the war continues to save their fertile farmlands and its water supplies.  And they will not hesitate to reinstate the blockade if need be.

I had driven in to the Blockade that morning, looking south across the Plains to the polluted and dust-laden skies of the Hunter Valley, where the government has allowed every coal company to win every battle. Down there it is the wineries and thoroughbred horse studs now protesting that their industries cannot cope with any more coal mines.

The difference when I looked north, away from the coal-trashed Hunter, is obvious – clear blue skies as country skies should be, not murky brown. I admired the vast patchwork of ploughed land and crops, with the rusty red of sorghum seed-heads, the green of new crops, the cream of harvested stubble and the rich dark soil itself.

Later that day, heading towards the hills and home, I pass incredibly flat golden vistas of sunflower heads and their vibrant green plants and I am struck by its ‘livingness’ as I think of the appalling contrast I will meet back as I drive back into the Hunter.

Vistas of dirt and coal, an industrial hell, a dead landscape, seen through the veil made by one of the highest concentrations of fine dust particulates in Australia. I hope the Caroona farmers manage to stop this happening to their Plains — and after speaking to many of them I believe they will!

5 thoughts on “Farmers versus BHP”