‘I have a lot of these. I thought having the screens fixed would stop them getting in the house and running around this summer. It didn’t and it’s worse than ever this year! It’s quite annoying. They poop on everything. I got some great shots of two battling it out dramatically last week — they were biting each other on the head and then flipping in the air together. It was a pretty dramatic fight over who gets to claim the back of the refrigerator, I believe.’

Intrigued, since my skinks so far seem non-aggressive, managing to divide territory quite amicably, I asked Darian to send some of those photos and with his permission I share these three below. Thanks, Darian!

The flipping over is clear and they contort like wrestlers, but I am astonished that they bite the head, not a soft, vulnerable part like the stomach. I wonder if many lose an eye this way.

Perhaps they hold firmly with their jaws — to flip — rather than bite?

I will now be on the lookout for battle wounds on my skinks, of which there are now five zipping about on the verandah. Glad my screens work! 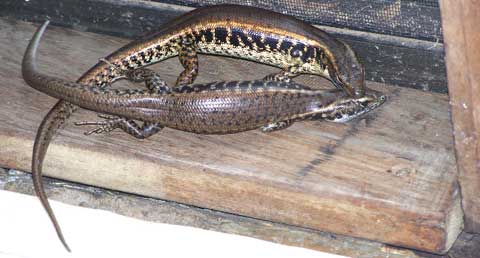