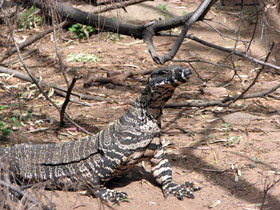 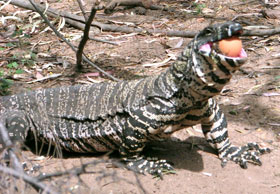 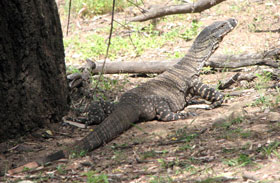 I haven’t seen goannas on my mountain, but they are quite common in many places. This one, the Lace Monitor, is the only type I’ve ever seen, mostly in sandy areas.

It’s one of Australia’s largest lizards, with the males sometimes exceeding 2 metres in length. Having always been told that goannas will run up the nearest vertical object, be it tree or person, when disturbed, I watched this Hunter resident from a safe distance, grateful for the zoom on my camera.

I was very wary of those sharp claws and powerful legs. Admiring the pixellated pattern of stripes and spots on its loose skin, I could see why ‘lace’. It also recalled certain indigenous art styles.

They are carnivorous, eating any carrion. And many a farmer has cursed the egg thief in their hen house. Tossed an egg, this goanna caught and swallowed it effortlessly.

No more eggs forthcoming, it turned and lumbered away, swishing its long tail, which ended in a brown needle-point, in poised arcs. In the shade of a nearby ironbark, it sprawled its back legs flat and settled down to contemplative digestion of that egg, which had so mysteriously arrived in time for brunch.