November was another month of library talks for me. Victoria’s Eastern Regional Libraries booked me to address their Reading Café at Lilydale.

This is a most civilised affair where the audience munch on sandwiches and cake and sip a cuppa while I read from my book and generally rave on. 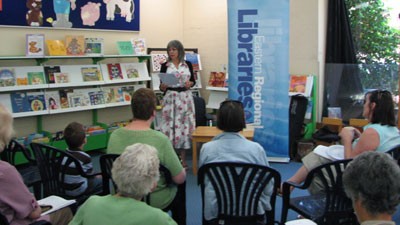 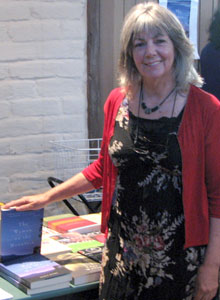 At the marvellous mudbrick Eltham Library they nibbled on cheese and bickies and sipped wine in an equally civilised manner. Hot question times followed, and at Eltham we only stopped because the library was closing.

But the most civilised part about Victorian libraries is that they pay their speakers! They appear to understand that writers need to eat in between the free fare do’s.

Back in NSW, I was treated to an underground tour of the warrens beneath the State Library as their vibrant PR person, Deb McBurnie, guided me up from the car park to the elegant Friends’ Room. Once again the audience nibbled while I talked, only this time they paid for the privilege.

As part of the Library’s free exhibition, ‘Impact: A Changing Land’, I thought it a good chance to go to town about the impact of coalmining in the Hunter Valley, showing large photos of treasures like Anvil Hill that will become trash if that mine goes ahead.

Given that the State Parliament is only a few doors up the road in Macquarie Street, there was a lot of fingerpointing and blame allocation from me. The audience didn’t exactly stand up and shout ‘Shame!’ when I mentioned Mr Sartor’s name, but there was a great deal of vehement head-nodding.

I also took the chance to plead for environmentally-minded Senate voting the following Saturday.

And it would seem that they and thousands of others did just that. Let’s hope the new gang finds the courage to take us beyond coal.