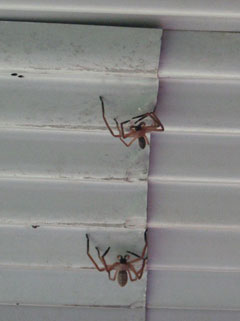 One afternoon in this recent wild hot November that broke records and threatened many places with fire, I ventured out of my dim cabin to see what the sky was doing. It was dim because I was trying to keep the heat out with the curtains drawn; in any case the winds were too strong to risk an open casement window snapping and straining on its stay peg.

As soon as I reached the screen door I noticed these two spiders hanging from a join in the tin roof. Dead or alive? I couldn’t tell. It was 35ºC out there, according to the verandah thermometer, which was a lot further away from the heat of that tin than the spiders were.

I had never seen these spiders before. The extreme heat must have forced them out of the overlap, if that’s where they usually lived. They must be fried! When I went closer, they didn’t move. Quite decorative, with their pink and black colouring and curving ‘pedipalps’ (if that’s what they are).

Understandably, they seemed to be holding on with as few feet as possible. But why not simply move to the timber rafter? 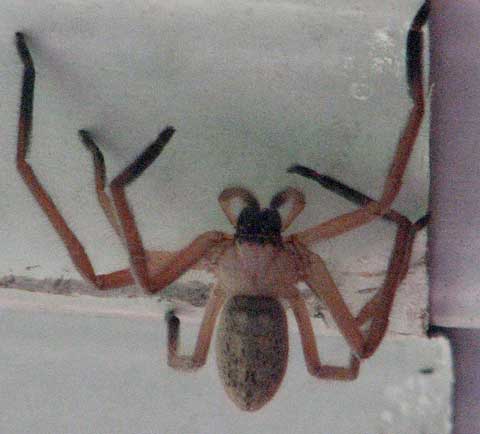 I walked to the other end of the verandah, on the lookout for other creatures seeking cooler relief.  Seeing none, I turned to take some more photos of my hot-footed pair. They were gone!

Clearly far more alert than they’d looked, as soon as my back was turned, they’d scarpered — hotfooted it, in fact!