Recently I left the mainland of Australia for the first time. I don’t count flying to other lands, since I didn’t experience the same physical separation.

This time my little red Suzuki and I were to be shipped ‘across the dtich’ as they say in Tasmania. From my first glimpse, across the promenade and sandy beach at Port Melbourne, I see that, appropriately, the Spirit of Tasmania vessel is red too.

Station Pier is quaintly old-fashioned, dwarfed by the ship. The actual shoreline is ringed with modern cafés and bars, with the light rail station’s open platform also the entry to a café. It’s so convenient that I think of the mad plot to get rid of the historic Newcastle Railway Station which similarly brings people right to the shore. 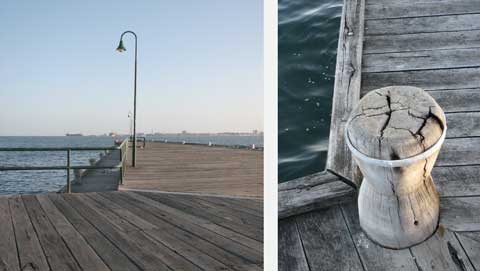 The other piers seem familiar, doubtless from Melbourne-based settings for crime shows and grainy grey art films; they are picturesque too — patterns and sculptures in weathered wood.

But it takes ages for the lines of motorhomes and campers, 4WDS and cars, to creep around the loop, long past Customs where I surrender my camping gas bottle.  By the time we are nearing the ship itself, the light is fading, the city turning pink. I regret anew that only night sailings are possible in these colder months. 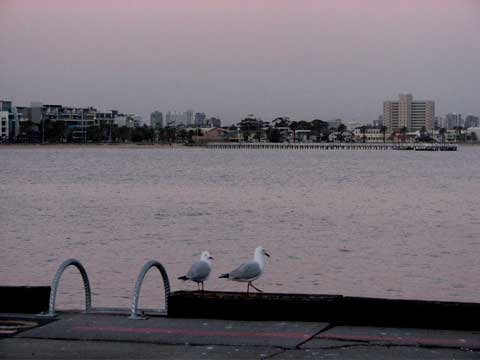 I don’t realise that the seagulls will accompany us long into the dark, squawking and wheeling white in the lights above the boat.

Naturally I don’t manage to take a photo while driving into the maw of the ship, but it’s an experience indeed! Past corridors of parked transport trailers bereft of their prime movers, snaking around to go down a ribbed ramp, under a giant hatch that will be shut on top of us, and to be poked and packed into the narrow end with other small cars.

(Unfortunately I immediately forget on which level I abandoned the Suzi and will have trouble retrieving it.)

For the next hour, from the spray-dashed deck where only a dozen smokers and I congregate, all I see of Victoria is a seemingly endless thin flat strip of lights.

Twelve sleepless hours later — the ‘ocean recliners’ do not recline enough for sleep — I arrive in cold and wet Devonport, having been unable to see the approaching shore of this almost foreign land, Tasmania. I am disappointed, but too tired to do more than extricate the Suzi and head south to Hobart.

2 thoughts on “Leaving the land”