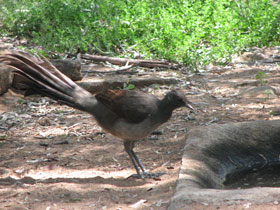 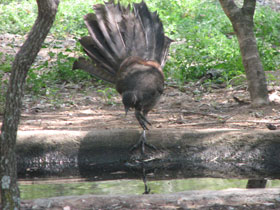 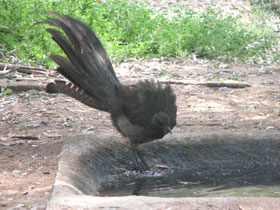 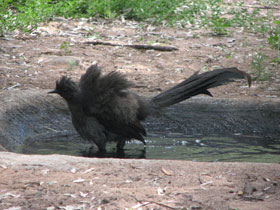 Friends of mine live in a dry sandy valley nestled up against curving sandstone ridges. There is plenty of cover for birds in the thick understorey of flowering native shrubs, and beneath them is mainly sticks and bark and rocks and sand, with little grass.

Water is precious here, so they have made a small rectangular pond (2.4m x 1.5m x 600m deep in the middle) close to their house, for the animals and birds who live here too.

On my last visit I saw a young Superb Lyrebird take a bath there.

The male Superb Lyrebird, named for his elegant tail, shaped like the lyre instrument when raised in display, has one of the most complicated songs of all the birds in the world. He not only mimics sounds he fancies in his environment, whether made by birds or man, but interprets and assimilates the sounds into his own song.

As in many birds, the female has no need of superb tail or song, for she is the one to be courted. I thought this visitor was a female at first, but the tail feathers of young males can resemble those of the female or a mixture of mail and female. They do not breed until they have the full fantastic set, to properly court a female.

This one had the broad central feathers of a female but the developing marked side feathers of a male, which will one day form the lyre shape. And since it was fanning that tail a little, a young male it was.

In subdued grey and brown, he walked daintily around the entire perimeter of the pond first, dipping a toe in the water every now and then, as if to test the temperature. He bent over as he did so, perhaps admiring his reflection in the pool.

Finally he ventured in, widely-splayed feet immersed first, then up to the knees. He wriggled and splashed, dipping and ducking under, fluffing up his body and head feathers until he looked like a punk version of himself.

Hopping out, he didn’t shake dry, but hightailed it up the hill. I could see another one, perhaps another of the teenage males, waiting under cover of the shrubs. Waiting to become as superb as their dads.