The other day, hearing the warbling of a strange bird outside, and close by, from the sound of it, I went to investigate.

No stranger. The baby magpie was growing up; still in the mottled brown of youth, he had progressed beyond the repetitive whingeing that drives me crazy.

Perched on the ridge of the glasshouse shadecloth cover, throat uplifted in proper maggie singing stance, he was practicing pre-singing. A repetitive fragment of the magpie song, to be sure, but he was definitely singing. Dapper-dark Mum was at hand to offer tips, corrections and examples. 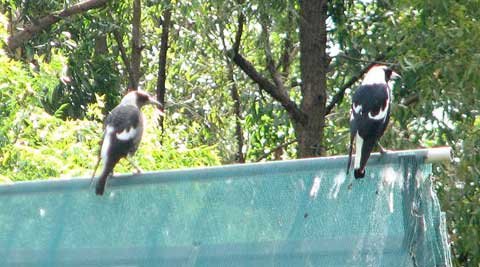 But he wasn’t ready for an audience. As soon as I came into sight, he stopped singing. Both he and his Mum turned their backs on me and pretended they were only interested in the more mundane lesson of worm-watching.