Visiting a friend recently I spotted a solitary white ‘mushroom’ in the middle of their grazed paddock. It looked like the elegant parasols I have had at home sometimes.

I took the camera over to investigate; the inquisitive sheep followed me. 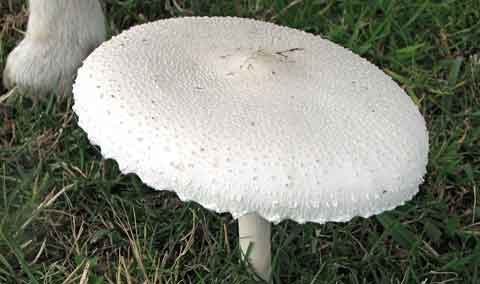 It’s an especially beautiful fungus, frilled and flocked and so purely white as it is. It always makes me think of demure young ladies in Victorian times. It is Macrolepiota dolichaula and I believe it’s quite common. Some people eat it without ill effects; others find the opposite; others, like me, don’t want to find out.

Only a week before I had stopped to see what these huge fleshy fungi were, in an overgrown roadside area, normally mown. There were about a dozen of them. 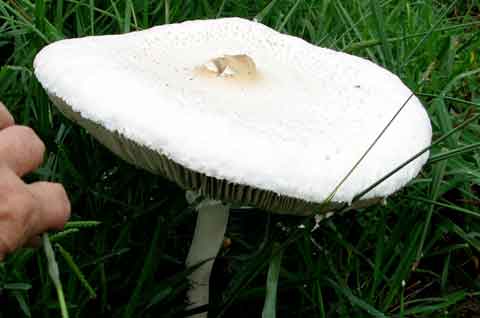 I’d photographed them but not looked them up. The central peak, the ‘umbo’, looked like lightly browned meringue.

Now I realise they were probably the same as the one my sheep fancied, but because they were turning upwards, probably older, they looked more substantial, not parasol-like at all.

The patch is now mown and no trace of the colony exists. I wonder if the mowing man felt reluctant to slice through them?