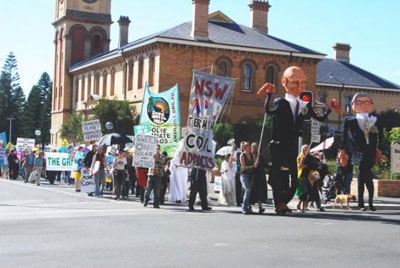 On Tuesday 31st July I got all dressed up to join a street march organised by Rising Tide, a Newcastle-based grassroots climate change action group.

While they constantly use their considerable pool of brains to campaign aginst any new coal mines or increased coal exports in the Hunter in conventional ways like submissions, they equally win my admiration with such creative and energetic actions as this march.

Headed by giant puppets of Peter Garrett and Kevin Rudd, chained to Coal as they are, with a troupe of ashen skeletons in floating funeral raiment carrying coal to local MPs, the parade stopped traffic and chanted ‘No New Coal’ until it was hoarse.

Grannies like me and a phalanx of stroller-pushing mums joined the dreadlocked young in a parade of around 200 people protesting the insanity of increasing coal mining and coal exports.

Given that the giant Pasha Bulka carrier had been washed up on the local Nobbys Beach by just such an ‘extreme weather event’ as is predicted from increasing climate chaos, how can the Iemma government claim to be dealing with climate change when they have approved the huge Anvil Hill mine and the expansion of the Newcastle coal loader?

I reckoned it was worth donning a bikini years after I swore I never would again. Pretty fetching, eh? At least I was ready for any weather event.