Having opened my house yard gates over a year ago, I never expected to have to mow grass again. Given that I was sacrificing so many garden plants and shrubs to the apparently omni-herbivorous marsupials who took up the occupancy offer…

I should have known better. They don’t like long grass, tussocks or certain introduced grasses that must have come in with horse feed. They were too busy with roses and lavender and jasmine and grapevines and citrus to bother with most of the grassed areas.

When I finally began to mow the jungle again, the kangaroos appreciated it, immediately claiming the ‘lawn’ section as their afternoon lolling spot.

Then the mower gave it up as too long, too dense, too damp, and so it remains.

But wallaby or roo, they love kikuyu.

Hearing clicking sounds floating in through my ‘office’ window the other day, I went to investigate.

Several wallabies were so assiduously working on the kikuyu near the cabin that they were audibly chomping, pulling up the grass and snapping the stems. 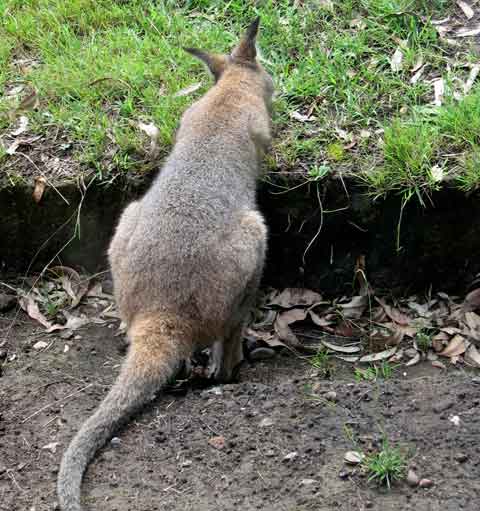 On the other side of the cabin, a young wallaby was sitting in the trench, paws on the table as it nibbled its way through the grassy fare laid upon it — not kikuyu.

The elongated rear view thus offered was interesting because of the distinct colour changes in its fur.

They are called Eastern Red-necked Wallabies but they are also Red-tail-based and the shadings to grey and back again are soft and subtle. 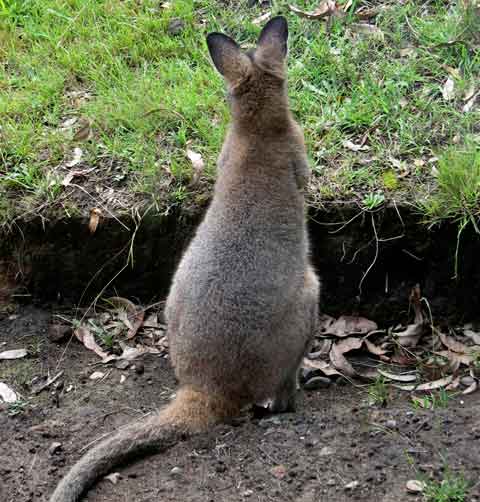 When it abruptly sat up, its little dark-rimmed ears erect and alert and its childish elbows tucked in close, I followed its stare. A black snake, scooting into the long grass, too fast for the camera.

At least I can see them in shorter grass; keep eating, I urged the wallaby!