It was still daylight, the last of the day’s excessive heat finally withdrawing as the sun sank over the western horizon.
I was lolling on the verandah couch, home brew in hand, grateful for the fitful cooler breezes reaching me.

When I stood up, I saw that, literally behind my back, the moon had risen in a fully blue sky. It looked to be a perfect sphere.

And close by, a tiny bright dot to which I involuntarily sang the childhood rhyme, ‘Star light, star bright’, and made my wish. 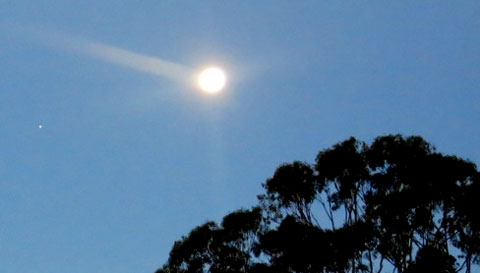 But closer up, it’s another small sphere, as equally visible as the moon. No star, but Venus, the brightest natural object in the night sky after the Moon. 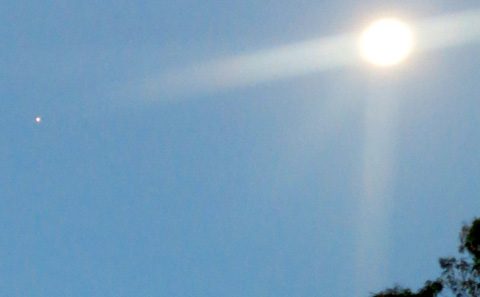 I’m not the only one to mistakenly wish on this ‘star’ as Wikipedia says that:

Venus reaches its maximum brightness shortly before sunrise or shortly after sunset, for which reason it has been referred to by ancient cultures as the Morning Star or Evening Star.