I’m not allowed on my front verandah at present. Two sets of protective parents say so.

The Welcome Swallows have hatched a second set of babies in the original nest. I have spotted three sets of panting baby beaks so far.

Perhaps being second time parents on my verandah in one season has made them more relaxed around me.

But the Willy Wagtails frantically circle and flit above me, chittering incessantly, even when I keep my distance or stand inside at my bedroom window to watch the babies. I wish they’d accept my assurances and spend more time feeding and watering the babies.

So I don’t go as close to take the photo as the Swallows permit.

I am feeling anxious myself for all the nestlings as the days heat up; 38 degrees on that verandah yesterday, and their parents have built the nests right up under the tin roof, which is lined but not insulated. 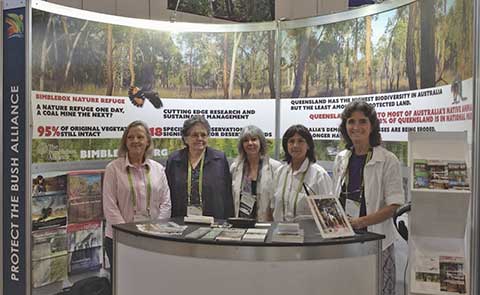 Conversely, I have just spent a week in icy airconditioning. I’ve been in way-too-crowded Sydney with four bush and bird loving ladies: L to R, Sheena Gillman, Patricia Julien, me, Paola Cassoni and Lee Curtis. We were on the Bimblebox/Protect the Bush Alliance stand at the IUCN (International Union for the Conservation of Nature) World Parks Congress.

This Congress has been 10 years in the planning. People have whispered to us that the IUCN would never have chosen Australia as the venue for this Congress had they known what our government would be like in 2014: anti-environment and anti-action on climate change. And stupidly pro-coal. There are about 2000 people here but apparently others had opted out in disgust. Everyone knew about the Reef.

People were actually commiserating with us for having such an embarrassingly regressive prime minister. I offered to swap him several times but there were no takers.

For my part, I have been apologising to all for our coal fuelling their climate chaos pain.

Unfortunately the IUCN did not acknowledge the current and threatened impacts from coal to our ‘protected’ places like the Reef and Bimblebox. We know Bimblebox is home to 154 bird species… and counting. Worth far more than a coal mine for Clive Palmer.

As the only stand that mentioned mining, we did our best to arouse the very large elephant in the Dome. We made sure overseas delegates knew that our governments put Coal before Conservation every time.

Greg Hunt gave a backpatting closing ceremony talk that made me want to throw up. Conservation starts at home, Mr Hunt.

Later a young Indigenous man dared to let the elephant roar in his speech: extractive industries must not be allowed to harm the Reef any further, any longer.