I’ve been going to Gloucester twice a week lately, reaching the camp in time for the daily camp meeting and to catch grand sunsets like this one, joining whatever action is decided for the next early morning, helping ‘man’ the vigil info site.

Since the Halliburton fracking team snuck out at 4 am last week, having done their foul deed on the designated four wells, there’s been a change in tone and focus.

Some token healing happened last Saturday. We get up early at camp, and the mood was high that day, as were the camp numbers, for the seventh Walk down Fairbairns Road to the frack site gates. That’s my slide-on Gypsy on the right, with her awning rolled up against the previous night’s wind.

This Walk was different, as about 150 from the centre of the long chain of walkers simply climbed through a fence and reclaimed the site. A mass walk-on!

For once security and police were outnumbered and outstrategised. No harm, no damage, but it did our hearts good after the weeks of feeling helpless with the Halliburton heavies in charge.

We had more people walking than ever before, of all ages; maybe the fact that actor Michael Caton (the tall one in the hat, towards the left) walked with us attracted some newcomers. Having a celebrity take up the cause is invaluable: thank you, Michael Caton!

As the Gloucester Protectors camp — but not the campaign! — considers a recess and the next steps, this week we held a small vigil outside the AGL office in town.

It’s opposite the Country Lodge Motel, where some of their workers have stayed, but there is no sign, front or back, on the AGL HQ to announce their presence. High fences and security warning signs is all. Are they ashamed of of what they are doing here? 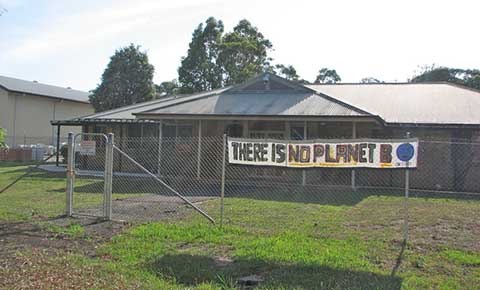 Well, there was one sign on its fence temporarily… 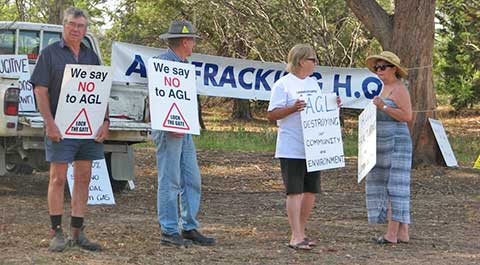 We had our full array of signs, including a banner that identifies this place as  ‘AGL Fracking HQ’. Here are local longterm battlers, Ed Robinson, Rod Besier, Tina Robinson and Karen from the Herb Farm at the top of Fairbairns Rd. All deserve medals as local heroes – and for AGL to leave forever and let them go back to their lives. 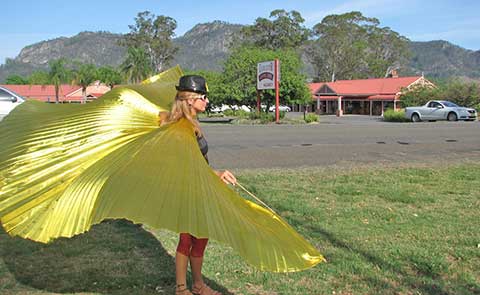 But that day we also had a beautiful yellow winged creature in the form of the crinkle-caped Shaz, who I’m sure caught the attention of many in the on-the way to work or school vehicles that passed.

One driver certainly noticed, as she took the time to open the window and scream abuse of the four-letter kind at us.

Despite this gorgeous addition to the scenery, apparently the owner of the motel was not happy about our silent stance across the road. I wonder why…

3 thoughts on “Postcards from Gloucester”