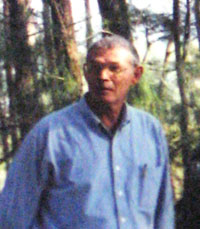 Watching someone you love dying slowly, even if painlessly, is hard. I’ve been away from the Mountain for five days, keeping my friend Emily company at her husband Ken’s deathbedside as he shrank to a pale husk, incredibly breathing on, despite running on empty.

I’d known Ken Donald for 40 years, had been at their first wedding in 1970 – Miss Sunshine marries dour Scot. Yes, I said ‘first’, because the marrriage didn’t last very long that time, despite each declaring ever after that they never stopped loving the other.

Life happened to them separately for 30 years, but they re-found each other recently. When they came to my Mountain for a weekend, as a couple they were the most romantic I’d ever seen, despite being well into what many would consider as advanced years (70s & 60s).

They re-married in December 2006, in an extremely poignant ‘shotgun’ wedding. For Ken had been diagnosed with cancer.

They had no idea just how very advanced it was, but they only managed a week of married life at home before he was hospitalised. And there he stayed. He’d given up smoking a decade ago, but those bloody Rothmans had done their work by then. 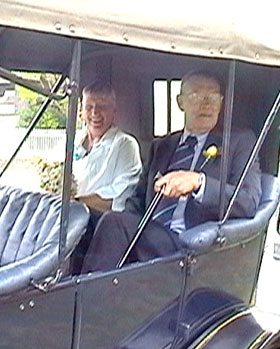 So Emily re-met the love of her life just in time to be there for him when love is most needed. How lucky were you, me old mate Ken?!

Ken was a laconic bloke who loved history and the English language and with whom I swapped reading recommendations and bemoaned the demise of the semi-colon.

In my book, he’s the woodchopper friend and the one who helped me change the oil in the generator — fruitlessly.

I am especially sad that he didn’t get to read my book, red pen poised. We’d have had some great discussions afterwards, over a few home brews of course.

I’ll miss him — but not as much as Emily.

2 thoughts on “Of love and death”