Last weekend about 300 people gathered from farflung parts of the east coast to show that they cared — about the unique Pilliga Forest and its flora and fauna, about the Great Artesian Basin, about the farmers of the North West — and about the Santos CSG Narrabri Project that threatens them all. 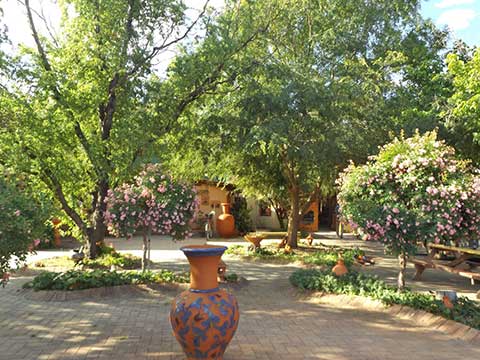 Most camped at Barkala, home to the deservedly famous Pilliga Pottery, a creative and conservation oasis built by Maria and her family over decades, on their beautiful Pilliga property, a birdwatcher’s paradise. 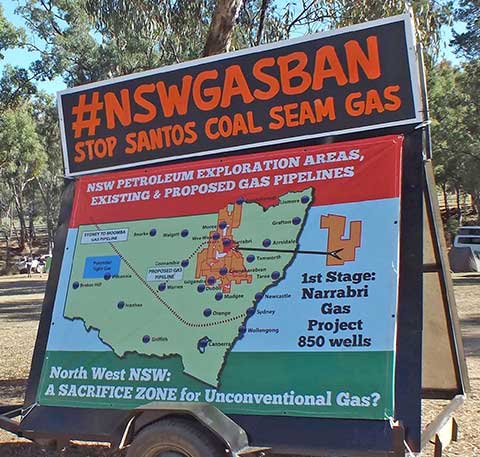 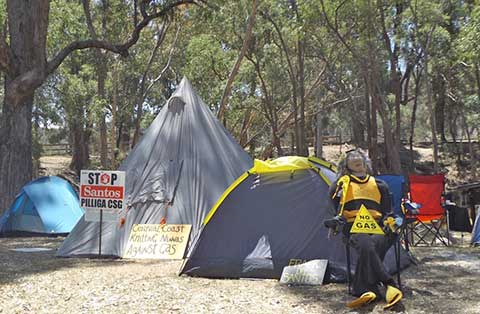 From Friday evening onwards the cars rolled in from the dusty road, tents and signs popped up, and volunteers manned information and kitchen tents. 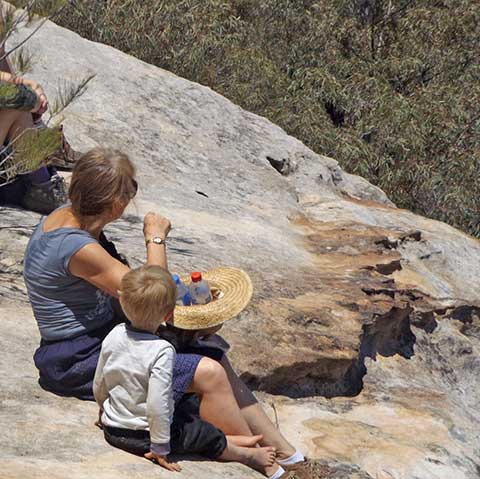 The 200 or so campers spent Saturday morning on walks and tours discovering the Pilliga. I opted for Maria’s Walk, to her special lookout, where we looked across one aspect of the vast 500,000 ha. of this largest temperate woodland west of the Great Dividing Range.

Maria pointed out to us and her small grandson the distant Warrumbungles, with the dome of Sidings Springs Observatory just visible. Their special Dark Sky status will be ruined if Santos proceed: science and tourism gone for gas.

The Pilliga is one of Australia’s biodiversity hotspots; at first passing glance it may look the same, but is actually most diverse and rich, with around 30 distinct ecosystems, home to over 1000 native plant species and 300 animals, including 15 threatened flora species and 35 threatened fauna species… at least so far as we know, since the Pilliga has not yet revealed all its mysteries.

Those we do know, like the Pilliga Mouse, the Black-striped Wallaby and the Koala– cannot survive in the maze of an industrial gas field. 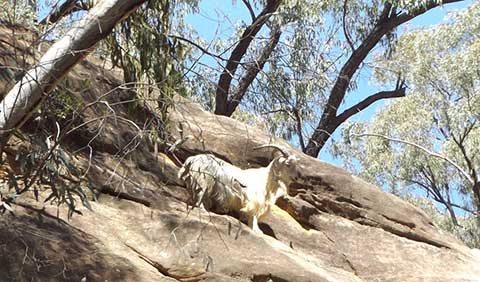 On Barkala itself, we walked through the varying vegetation of forested gullies and ridges, with dry waterholes, sandstone caves and cliffs– from one of which a rather majestic feral billygoat warily surveyed us.

Workshops filled the afternoon, with planning forums and a fabulous indigenous dance performance into the twillight before dinner and music and song. And bed, as a 7a.m. start was planned for Sunday’s actions. 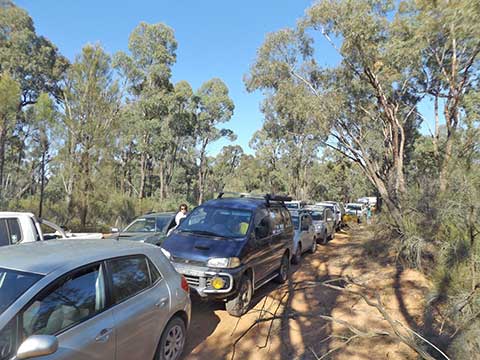 Amazingly, an early and bountiful breakfast awaited, plus snacks to take with us. A long convoy of vehicles drove for about an hour, up the Newell Highway and into Pilliga State Forest to dry sandy Bohena Creek, site of the human NO CSG sign we were there to make.

Many more met us there, locals and farmers, our numbers now being about 300 passionate Pilliga Protectors. The Pilliga region is so vast that even locals may have to drive several hours to get to another part, as today. 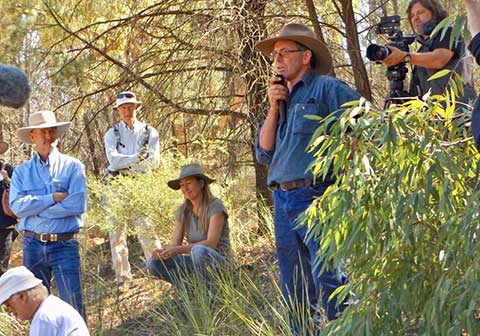 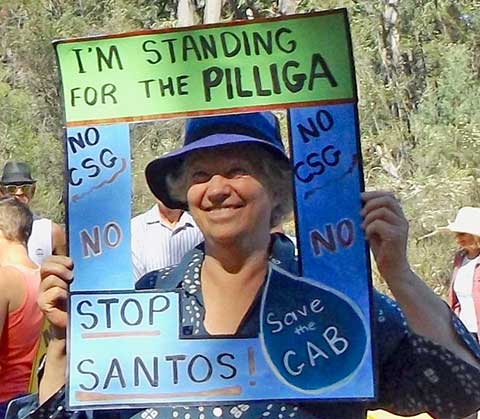 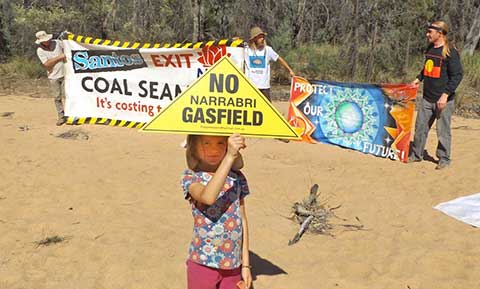 Several farmers spoke eloquently and movingly about the grave risk — guaranteed? — to the water sources on which they depend. The Pilliga is a critical recharge area for the GAB. Depletion and pollution of precious water — for an uneconomic and unnecessary gas resource?

Fire danger from the tall gas flares, permitted even on total fire ban days in this dry forest, was another huge concern.

The insanity of the Santos CSG project was made crystal clear; there are no good reasons for it, only obvious reasons why it must not proceed.

Marshalls directed us to the letters drawn in the sand; about 60 people per letter. All ages were here, from the elderly on sticks to kids and dogs of course a clutch of Knitting Nannas, from the Central Coast, Newcastle, Gloucester, the Manning and the Northern Rivers. 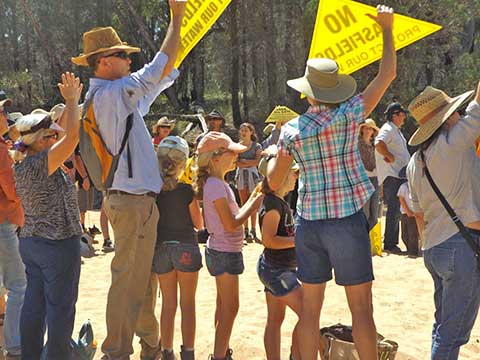 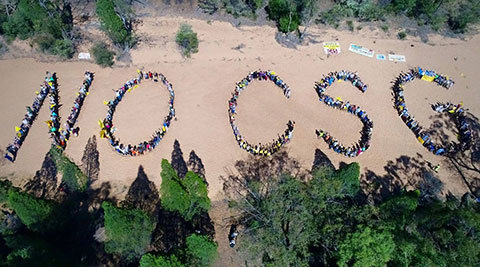 It was hot as we waited for the drone to adequately capture our message to Santos and the government, but the excitement was as high as the very vocal determination to stop this shortsighted vandalism of our land and our children’s future. I happened to be on the ’S’. 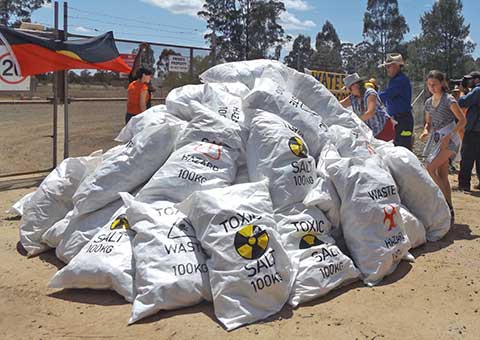 Many of us then followed the innovative Jo Holden and her two tiptrucks of bagged paper symbolic ‘toxic waste’ to the gates at the Leewood Facility, where they were piled up to the chant of ’We don’t want your toxic waste’, amongst others. Narrabri CSG will be SEVEN times as salty as that from the Queensland gasfields. 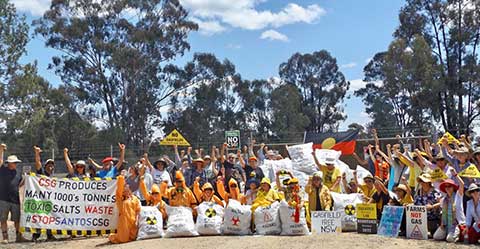 There is NO solution for dealing with the vast amounts of this toxic material: it is not ‘merely’ salt that comes up from the coal seams in the water that must be extracted to release the pressure and let the gas flow. Radioactive elements are just some of the naturally occurring contaminants.

(Note: fracking is not currently the proposed method of extraction here.) 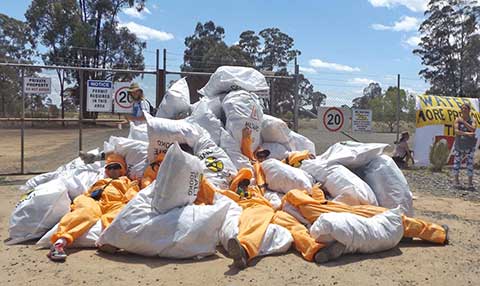 This event was very well organised; herding cats is nothing to what they pulled off this weekend with such numbers.

The People from the Plains were grateful for the outside support shown here; farms are large and scattered over great distances. They need us to keep up the passion felt this weekend and the pressure to say NO to the Narrabri project, which would be just the first of the Santos PEL empire.

Santos, this is only the start of the uprising of sane people all over the country who know the CSG industry must not be allowed to get away in NSW as it did in Queensland. The risks to water and health are proven, they have no waste disposal solution… and we neither need nor want it!

8 thoughts on “Passion in the Pilliga”