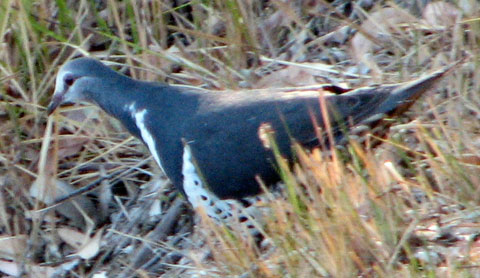 I’ve posted before about the times I’ve seen the White-headed Pigeons visit me from the rainforest. They’re classed as fruit pigeons.

Last week, from the breakfast table I saw two plump grey birds, waddling up the track in that distinctively nervous way that pigeons have.

They didn’t have white heads or chests, but did have clear chevron-stripes on their chests.

The pair came up the track to the house, separated, did a little foray up the bank, then turned and sashayed back down the track and out of my life again just as I reached the track with the camera.

The bird book tells me they are ground-dwelling Wonga Pigeons, and what’s more I had noted that on 10/6/03 I had seen three down in the spring gully, probably when I was planting my rainforest tree seedlings.

I’d visited their place, and now a decade later they were dropping in to mine. 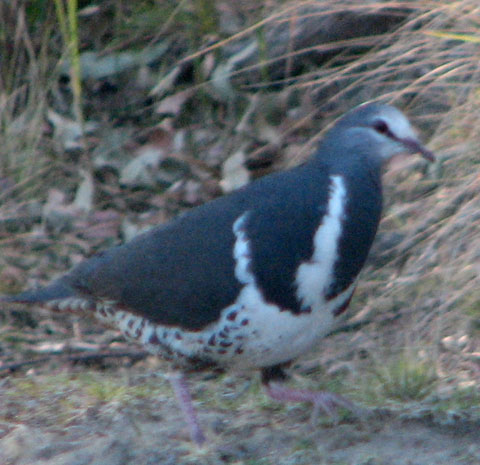 These are very sleek and handsome, their dark grey blue-tinged (to my eye). The book describes them as having a white necklace, but as they were constantly moving and wouldn’t face the front for a photo, it’s hard to show you that. Maybe this rather fuzzy one gives the idea, as the top stripes meet mid-chest. You can also see the pinkish legs and feet in this one.

The speckles below add to the crisp nattiness of their plumage, while the large eyes in the pale shaded head makes them look gentle.

They were seriously shy, so their one swift visit is all the more to be treasured. You certainly have to be on the alert here; you never can guess who will drop by or for how short a time.