Battlers used to be applauded in Australia;  this year I was privileged to meet Celia Mackay, the truest bluest Aussie battler one could imagine. I visited her property with the ‘Bridging the Divide’ bus tour, where city people came to see and hear first hand what rural folk are suffering from the coal and gas rush in Queensland.

Celia, from the Western Downs, thought she was doing the right thing in signing a conduct and compensation agreement with QGC to run their CSG pipeline through her farming property. Here she breeds Santa Gertrudis cattle, fattens lambs and grows forage crops. The interruption would only be for 12 weeks, they assured her, and they’d compensate her for that. 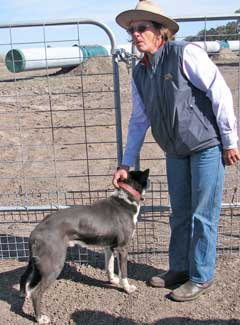 As Celia says, in the bush you expect people to be fair and honest. The company said they’d pay $3000 if she wanted take the agreement to a lawyer, or else she could keep the money, but she feels she was strongly given the impression by QGC that legal advice wasn’t necessary.

Now she knows it was, and that she should never have signed that agreement.

It meant a 40-metre-wide bare excavation where the enormous pipe sections were propped up on dirt until ready to be joined and later buried.

In the meantime, her sheep could get under the pipes.

The wild dogs who were attracted to the long bare stretch of ground could get under them too.

But her vehicle couldn’t get through. So it wasn’t possible for her to use those paddocks. 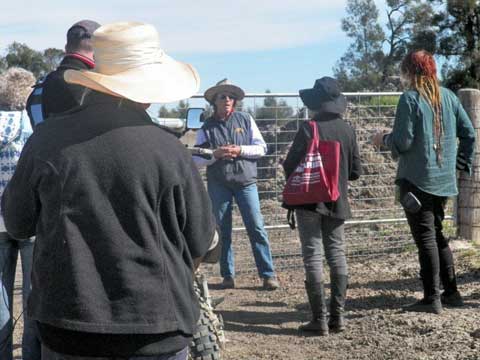 They said they’d put fencing and gates in to stop the dogs, and they did, but the knee-high gap under the gates let dogs in and sheep out. She lost more than 100 sheep to wild dog attacks. Celia said it took her ages to get them to add mesh along the bottom of the gates to make them of any use, and that was only after she’d locked QGC out.

In true neighbourly fashion they cut her locks to come in.

In effect Celia lost the use of 500 acres of her 1500 acre property, unable to earn money from crops due to the pipeline dividing paddocks and cutting her off from her access roads. 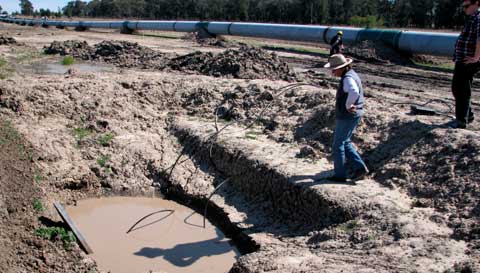 Other small ‘oversights’ that the company didn’t tell her about was a hole like this where sheep or children could fall in and drown—or a cable buried at a depth where her machinery could cut without knowing about it. She feels they are not treating her, as the landowner, or her business needs, with any respect.

She might have managed for three months but when we spoke in August QGC thought the pipe would be still above ground for another four and a half months. The project had kept being delayed and Celia was going broke.

In 2011 she sold her commercial herd to pay the bills; unable to finish her lambs on a sown pasture, she sold them for less than half their market value.

Then in 2012, in desperation she risked all and sold much of her precious stud cattle at auction to try to raise the $50,000 needed to take QGC to court and urgently renegotiate their agreement, for fair compensation for the reality of what is happening.

As Celia said, “If I lose this fight I will lose my property; I just don’t see how I’ll be able to keep going. But sometimes you just have to stand up for what is right and fair.”

And she hopes her case will warn other landholders never to sign such agreements without legal advice.

Celia needs help. Please donate whatever you can to this Aussie battler’s legal fund: