Heatwave days last week, but the wretched python had me beseiged in the house with the door and all but two windows shut! I still am beseiged, although the temperature has dropped. Here’s why.

I was making some small shelves in the house, trotting back and forth to the verandah to saw and drill timber, stepping over the thigh-high masonite snake barrier in place in the doorway.

On one foray back out, I got to the door just as the python was oozing over the snake barrier; half in, half out. I shut the door against it so it couldn’t come in, not fully shut, so not hard enough to squash it against the ‘barrier’ – ha!

I just stood there holding it, almost heaving with fear, cursing hard and wondering what to do! It wouldn’t be able to climb back up in such a small space so it  would remain there until I  did something.

Dragging the sewing machine over with my foot, I wedged it against the door, then climbed out the window and used one of my long bits of shelf timber to lever the ‘barrier’ up and hold it up so the thing could get out. If it headed my way, I’d drop the timber and run.

But it went into the box cover on my gas bottle, right near where the grandkids play at cooking.

Constant checking showed it later went back behind the shower to its old haunt on the timber frame. I washed in the sink that night.
Thoughts of what the situation would have been had I been a second later reaching the doorway kept me shuddering all night.

Next day it had gone from there. Good, maybe I could have a shower.

Peering about to see where it had moved to – far away, I hoped – I broke out in a sweat as I saw it curled up just above the shower. Had this been at night I might have missed it until I was in there, happening to glance up, maybe with shampoo in my eyes. Ugh! 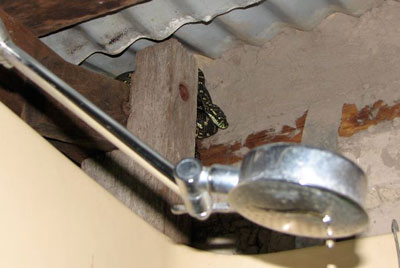 I think I’m losing my nerve to cope with such things. If the python gets inside I’d never find it in my crowded cabin. Worse still, if I didn’t know it had got inside and it just appeared, like from under my desk, where I now must check. Often. Double UGH!

Of course when my friend the snake man came the following day – no python. Or the next day. ‘Too hot for it’, he said. The door and windows remain closed except for the few with screens; I put the fan on.

There’s still no python to be seen; not that this gives me any comfort. I keep remembering how my friend kept looking up at my ceiling edges, or behind my fuel stove. He clearly thought it could be inside!

I will have to go a demolition yard and get a screen door and some screen windows to remake to fit. The ‘snake barrier’ has been tossed in the shed. But nothing is ever that simple: my car doesn’t have a towbar or roof racks.

Perhaps it knew the snake man was here. I expect to see it again now he’s gone.