After a week of rain, while walking along its tracks to the beach, the variety of fungi was a surprise.

They were mostly just poking through in the damp leaf litter, and my five-year-old granddaughter proved a top fungi spotter.

I am assuming the one pictured above is some sort of coral fungi, but I couldn’t find one this colour in my books.

In fact, these coastal forest fungi proved most elusive when it came to my usual non-scientific attempts at identification — poring over the drawings and photos and browsing the texts.

I’d have thought this orange number would have been easy, with such a prominent crown to the broad-brimmed hat, but no luck.

I wonder if it can be the one commonly called the Ghoul Fungus (Hebeloma aminophilum), because it grows on soil fed by ‘the rotting corpses of dead animals and even thrown-away bones’ (A.M. Young, ‘A Field Guide to the Fungi of Australia’). It has been recorded in eucalypt forest, although not in NSW, or not officially. 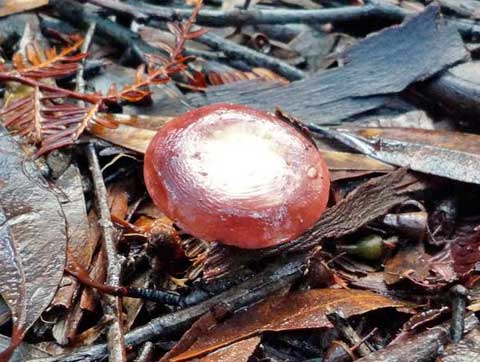 This one I think is my old mate that I call the tomato fungi, which I have seen on my mountain. That was suggested by my fungi guru Gaye Drady to be Russula aff. rosacea. 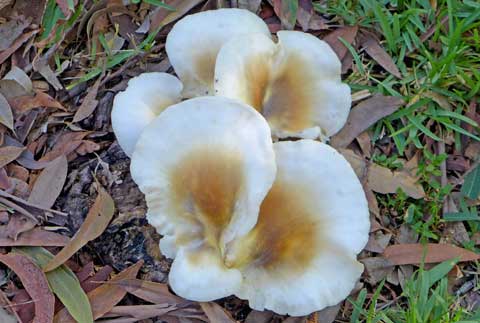 Looking up this one on Gaye’s site, maybe it’s the Ghost Fungus (Omphalotus nidiformis) which is luminous, so glows in the dark. Gaye says they can grow up to 200m diameter and ‘are found on living and dead wood, both native and exotic, and can often be found in gardens and parks.’ 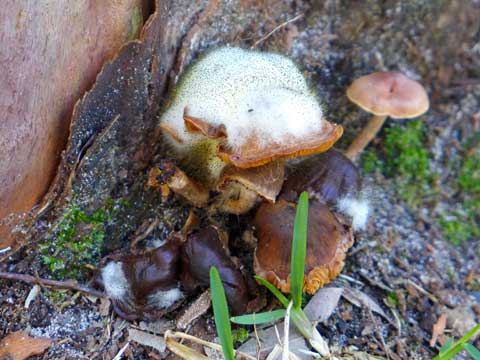 Whatever the little fungus underneath is, it was the frothy ice cream topping that caught my eye. Once more I turned to Gaye and it looks like it’s a species of parastic fungus, Spinellus.

What a weird and wonderful world is at our feet if we are truly alert to our surroundings. And how lucky we are that others like Gaye study these extraordinary organisms and share that knowledge so freely.