Following a brief but heavy shower of rain, I spotted this little arrangement in the climbing rose that hangs beyond my kitchen window. I probably only did so because the radiating central part of the web was delineated with raindrops.

So was the leaf that hung at its heart. I knew this was a Leaf-curling spider because I’d been told so before. Even my bad memory gets this visual association enough to remember its name!

But I knew nothing else about it. 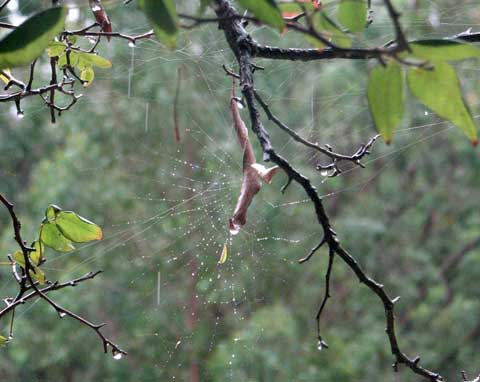 It’s one of the Phonognatha family, probably Phonognatha graeffii — according to the Australian Museum site. This was a gum leaf, not a rose leaf, for the female collects her chosen leaf from the ground, and curls it to a protective shape, tightly closed at the top.

She spins her silk to hold it in place and line it, and usually all you will see are her legs protruding from the bottom. With these she feels for the vibrations of any hapless insect that gets trapped in her web.

Until she has to make that dash, she is protected not only from rain but birds and wasps. 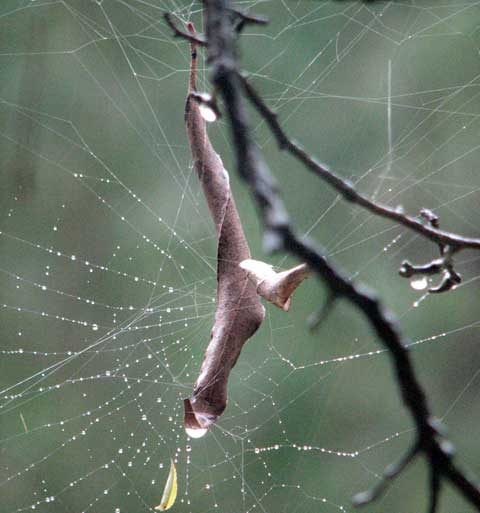 This day she was being sensible as well as reclusive, keeping her legs dry. If I could see her, she’d apparently be fat and oval-shaped with red-brown legs and body and a cream coloured pattern on her back.

I loved these details from the Museum site:

‘Sometimes other objects, such as snail shells (which come ready-curled), are used.’ Spidery labour-saving devices?

‘Juvenile spiders start off by bending over a small green leaf, but eventually graduate to larger dead leaves’.  Learner leaf-curlers!