In the past, I’ve walked in rallies or stood in protest against the threats from coal or gas that continue to bombard our special places.

On 28th January, instead I sat for a day, a small part of the ongoing blockade against Whitehaven Coal’s destruction of Leard Forest near Boggabri. (See my past posts here, here, here and here).

A convoy of us set out at 4 a.m. from camp; the tripod for our intrepid high sitter, Surya McEwen, went up across the gate in the dark under a crescent moon.

A row of nine ‘staunch supporters’ were arranged tightly side by side in front of the tripod, ready to lock arms in our chairs, to protect him and make it more of a problem for him to be removed.

By dawn we were all in place, with even the luxury of a shade tarpaulin.

Maybe because we were all over 50, we were happy to sit, but also willing to be arested if need be, so strongly do we feel about the shortsighted injustice of what is being allowed to happen here — and why we are helping to try to stop it.

Given the range of perfectly respectable elders who made the choice to sit that day, and if necessary defy the law, Mr Galilee is way off base. From the youngest of us, Sharyn Brock (55) next to me, to the oldest, Kokoda veteran Bill Ryan (91), next to her, we were all regular folk, seniors who care deeply enough about this insanity to come from Sydney, Manning Valley and the Hunter to do this.

For it is insane to be digging up a precious remnant habitat like Leard Forest, under misguided approvals using totally discredited offset plans, to pollute and ruin the beautiful Maules Creek farming valley, and wilfully disregard what is sacred to the Gomeroi people, for the sake of product that will add to our global warming debacle.

Mr Galilee says ‘The protestors’ mission is to shut down society to save the planet’. Shutting down a private company’s legalised looting, its plans to destroy this area, is not quite the same thing! And the planet is our only home, Mr Galilee: ‘there is no planet B’. Saving it is not an aim to be dismissed so derogatively.

Indeed it is our concern for our society, for the future of our grandchildren, as our governments place monetary value — ’the significance of resource’ — above all else, like health and water and food production and endangered plants and animals, that drives us. 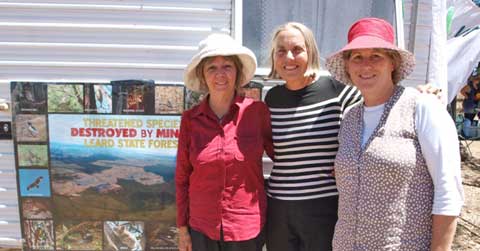 And yes, a Greens politician did lend support to the protest that day; Senator Lee Rhiannon (at centre) was with us from the cold dawn start to the hot late afternoon finish. Not just briefly for a media grab, as most politicians would. It was not a case, as Mr Galilee puts it, of ‘The Greens and their extreme supporters’, but the other way around; not that I ever admit to or advocate any extremism; this is just commonsense!

Ever since I’ve known her, about 9 years now, Lee has been actively supporting small communities and special places under threat.

As does Julie Lyford (right), ex-mayor of Gloucester and key driver in Groundswell Gloucester, who works so cleverly and so hard, unpaid, to save her community from being over-run and harmed by coal and coal seam gas. (Julie also sent me some of these photos.)

If such people are green extremists, I am proud to be counted amongst them. 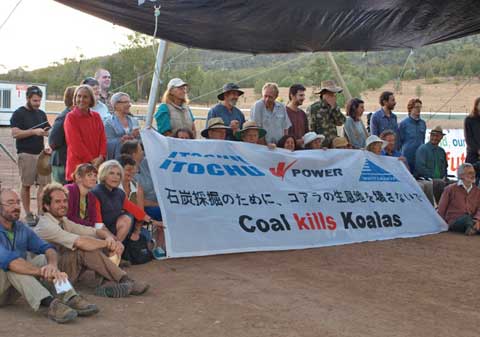 Of course there were younger folk there; after all, it’s their future at stake. How can they be castigated as activists, for acting to save it? They included some from Japan, given that much of our coal is headed for Japanese and Korean power companies, who have an interest in many Australian mines. 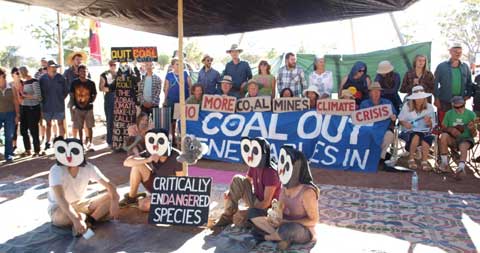 More creative young folk added a touch of theatre with these owl masks and toy koalas. Although as it was pointed out, any self-respecting owl would have quickly had those litle furry critters for breakfast! 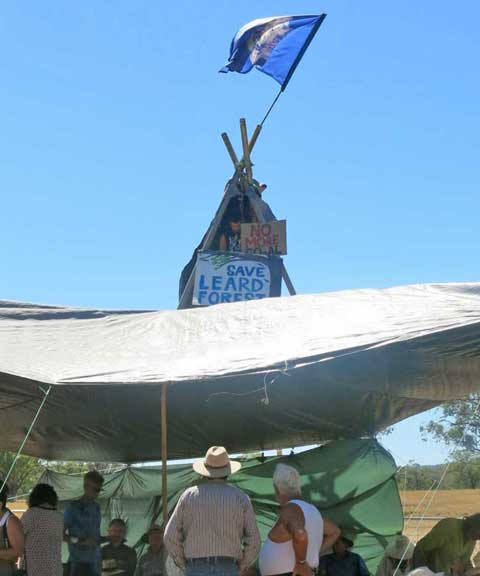 Our uncomplaining tripod sitter was up there all day, under a brolly and later a mini tarp to help bear the heat.

When the police finally got to us, after dealing with the pole and tripod sitters scattered elsewhere in the forest, we were asked to move back as it was dangerous to get him down and dismantle the tripod with us there. OH&S rules, you know.

We decided not to. They went ahead anyway.

Altogether about 30 people have now been arrested at the Leard protests; 120 were there on the 28th. They are to be applauded for standing up — or sitting down — for what is right, not derided, as Mr Galilee does, for ‘their self-righteous claim to the moral high ground’.

He certainly can’t claim it; self-interest rules in the Minerals Council.

As I drove out next day, the overburden mountains of the Boggabri mine and the fine brown layer of dust and pollution in the sky above gave a portent of what lies ahead in spades if the Whitehaven mine proceeds. It would be good if the investors decide that the delays in its path from the protests are not worth pushing on with a dodo product, of declining acceptability worldwide.

Action to save Leard is ongoing and supporters are needed; go to Frontline Action on Coal for latest news and new camp.

6 thoughts on “Sitting for Leard Forest”