On six continents groups large and small gathered to creatively celebrate and soothe the earth that we have so grievously wounded by our gung-ho extractive industries.

In Gloucester, the Knitting Nannas Against Gas had been making sunflowers of every hue and size for months. On the day, sunflowers sprouted all over town, even on the garbage bins. 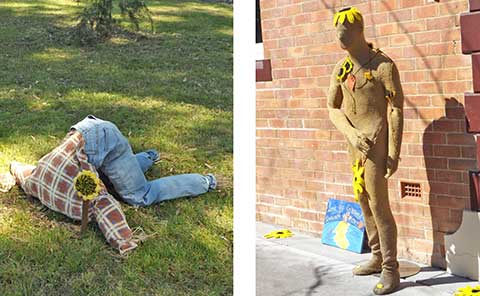 Mannequins were found in the most unusual places and positions.

People were extra colourfully dressed for the monthly Walk through town and the mood was more positive than ever. 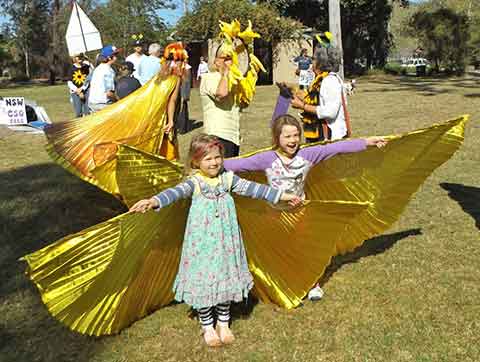 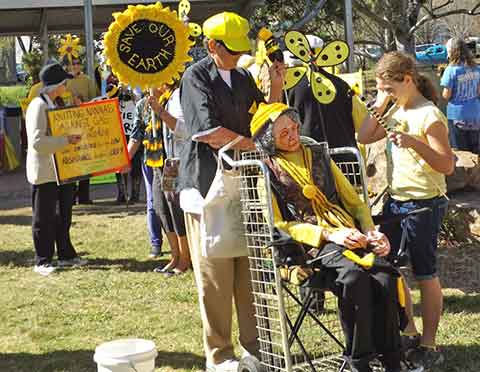 Children in golden wings danced about like butterflies but couldn’t bring a smille to Nora the Knitting Nanna’s face; she knows CSG is deadly serious. 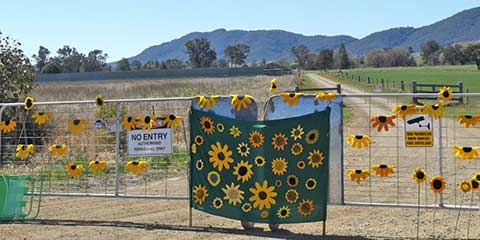 At midday we met again at the AGL frack site gates where so many anxious and sad early morning vigils had been held as the fracking went on behind that high green wall in the distance.

Now the Halliburton crew and their rigs are gone, AGL still have to vent the gas into the local air and take out the CSG water — then truck all the way to Queensland as no facility in NSW will have it, due to the BTEX it contains.

Today those gates bloomed with sunflowers and people parked and picnicked on the verge where once we were forbidden to stop.

Sunflowers are so much prettier than security guards… 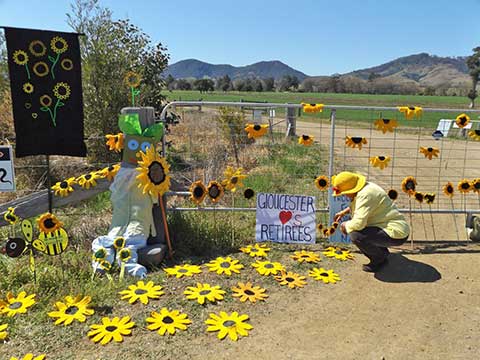 The security camera watched it all but no burly, poker-faced guards appeared. Clearly sunflowers and Nannas are not considered threatening enough.

AGL should not be fooled.

The Gloucester KNAGS certainly aren’t planning on giving an inch – or a stitch – until AGL are gone from their beautiful valley.

The NSW Gloucester Valley is stunningly beautiful. As I drove there on Saturday, I thought yet again how crazy it was to consider a gas field and a coal mine here.

Tourism is what Gloucester is about, for itself and as the gateway to Barrington Tops. Industrialisation and the attendant pollution is the last thing it needs.

Which is why the chapter in my book, Rich Land, Wasteland on Gloucester and Margaret River is called ‘Allowing the unthinkable’.

The NSW government is blowing its trumpet for buying back PELs (Petroleum Exploration Licences). As in the Blue Mountains, and most recently in the Hunter, where the Broke/Fordwich vineyard area has fought AGL for years, and in Sydney suburbs where the 2km residential exclusion zone would make it impossible for AGL to expand there anyway. Many of the PELs are ones that have been found to offer little CSG. 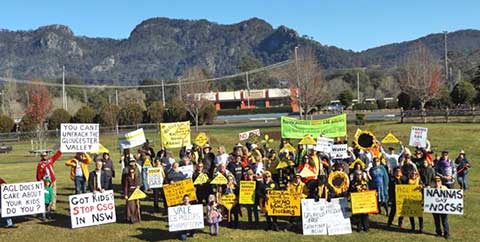 However, at Gloucester, because the AGL project there was already approved, albeit hastily and very misguidedly, the 2km exclusion zone was not applied.

Not because Gloucester folk are immune to the harmful health impacts of living in and near gas fields — especially so for children.

Apparently the state government just doesn’t care about them or their children when the interests of AGL dictate otherwise. 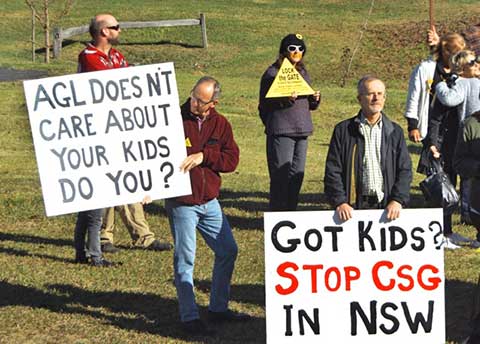 The disastrous record of stuff-ups and cover-ups from AGL’s first four pilot wells at Waukivory here should have been enough to call an end to this project.

AGL would be wise to do that sooner rather than later, because the opposition to it and the bad PR is not going away.

If anything, it will increase, as folk who’ve been fighting to save their own patches from CSG can now focus on helping Gloucester — like Derek Finter (above), who’d left home in the Blue Mountains at 4 am to get here for this Walk. 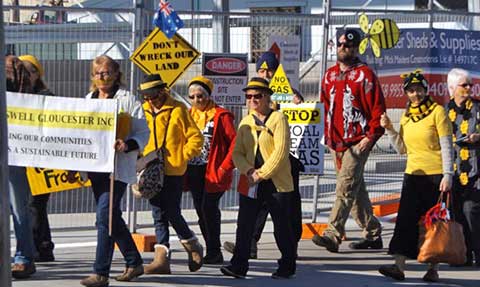 Every second Saturday, on the Growers’ Market Day, folk gather in Gloucester’s Billabong Park at 9am to walk peacefully through the streets, dressed in bright colours, especially the yellow and black of Lock the Gate and the Knitting Nannas Against Gas, and carrying placards, mostly handwritten and heartfelt. 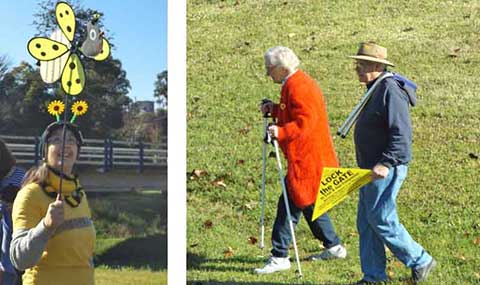 Kids in strollers, dogs on leads, babies in backpacks and the very elderly and not-so-able join in.

Afterwards we have a cuppa, cake and much conversation. This is a great community fighting for survival and healing, given the harm and disunity caused here by the AGL project. 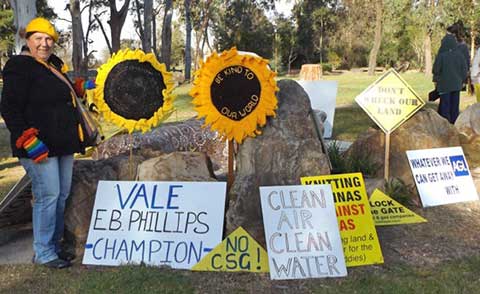 Usually we chant, but today we walked in silence, in memory of the clever and caring E. V. Phillips, founding member of the Barrington-Gloucester-Stroud-Preservation-Alliance. 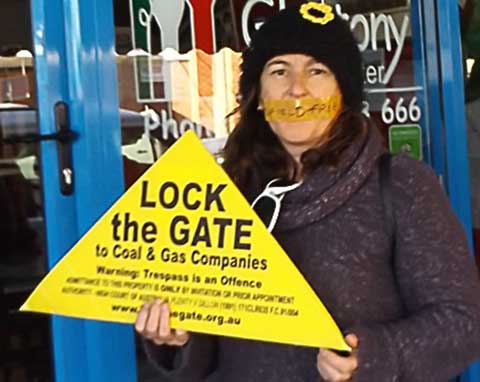 Many people wore tape with ‘Gas field free’ across their mouths, or — less painfully — on their clothing.

The silent walk was very powerful.

The next major event in Gloucester is the No CSG Summit on Saturday 25th July, hosted by Groundswell Gloucester and Manning Clean Water Action Group.

Find out the latest, become involved, contribute to the discussion and so much more. There will be a great line-up of speakers and lots of time for discussion.

Bring: Your lunch or purchase from one of Gloucester’s wonderful cafés.