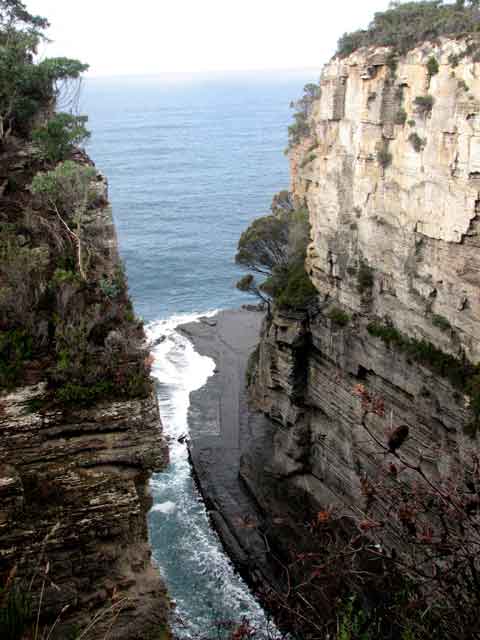 Near the bottom of the east coast of Tasmania is the Tasman Peninsula, a ragged blob of land reached via another, smaller blob, the Forestier Peninsula.  They are a whisker of land away from being islands like Bruny, close to the coast — and to Hobart.

Having little time to find even a smudge of the wild Tasmania beyond the charming, hilly and human-sized Hobart,  I headed down to the Tasman Peninsula for a few days’ camping. 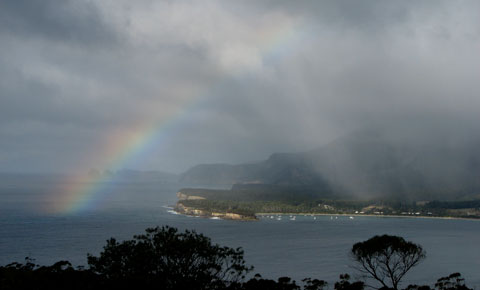 The coast around Eaglehawk Neck and beyond is rugged and stunning, but not totally wild, as outside the National Park, the accessible little bays in between the cliffs are dotted with small boats, and the shoreline with cottages, none of which can be called ‘shacks’ any more.

But it is this narrow ‘neck’ , only 30 metres wide at its narrowest, that has helped make it a good place to try to hold the line against the spread of the facial tumours that are rapidly slashing the population of the Tasmanian Devil, the wild Tasmanian I am most keen to meet.   Since 1996, the disease has killed 80% of them.

At Taranna is the Tasmanian Devil Conservation Park, where I get my first real-life sight of the Devil, Australia’s largest surviving native carnivore, now the Tasmanian Tiger, the Thylacine, is extinct. It is also the world’s largest carnivorous marsupial.

I am shocked — he is so small. Heavier, but no bigger than a male Spotted-tail Quoll, as I see at home. And such an odd shape, as if his parts are mismatched, with that big head and blocky hindquarters. Such red ears!  Such sharp teeth!