I have reluctantly become a grazier.

These two Friesian dairy steer calves are now our permanent resident lawnmowers, and company for Clancy the horse.

This block is cursed with setaria grass, introduced for cattle, but harmful for horses. That’s it towering over them on the right.

It depletes horses’ calcium, so Clancy needs supplementary calcium, even though he doesn’t prefer the setaria over the kikuyu and couch grasses.

It seemed ridiculously unsustainable to keep paying to have the paddock slashed.

Hence the live solution of pet cows. Handreared, they are gradually getting used to me as I feed them their calf pellets.

My granddaughters have named them Salt and Pepper, given their colourings.

As their owner quipped when he delivered them: ‘At least you’ve saved them from being salted and peppered!’

For they’d have ended up as someone’s weiner schnitzel.

Male dairy calves aren’t good for anything else…

As a vegetarian, I would not have used beef breeds, despite all the advice as to how many quid I could make. 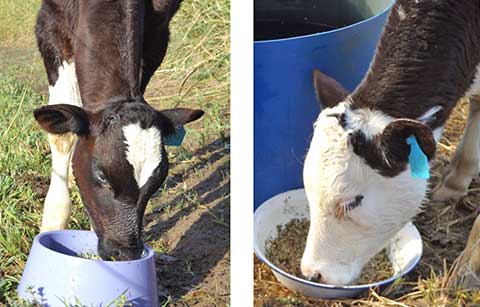 Pepper has the prettiest heart-shaped blaze. Salty is the pushiest, which is no doubt why he’s bigger.

Today they let me stroke them, for the first time since they came a week ago. Very cute!