This may not sound like much action, but when there’s frost on the tents and no hot showers for six days (10-15 July) – it is suffering for the cause.

Held in Newcastle, the world’s largest coal port, the national Climate Camp drew hundreds of committed environmental activists, mostly young, since it followed the Students for Sustainability conference. But there were enough greyheads for me to feel at home when I joined them for three days.

With workshops and discussion groups, the whole event was astonishingly well-organised and run by volunteers. Great vats of great vegan food were prepared to feed the hundreds. I earned a blister from my stints there, chopping pumpkin mostly. 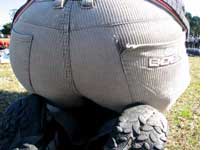 And there was action. On the Saturday hundreds more concerned people joined us. We crouched down to form a human sign – ‘Cut carbon — now or never’ and a human ticking clock, which caused us to leap up and ‘explode’ over the oval at ‘midnight’. If you weren’t in the helicopter it wasn’t much of a photo opportunity, except for the rear end of the person in front! 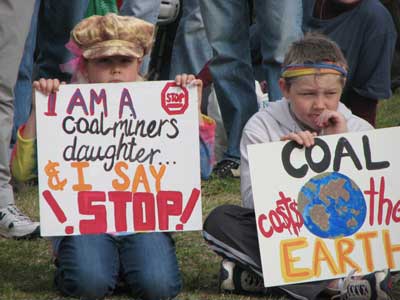 On Sunday we had over 1000 people of all ages and backgrounds turn up to walk to the coal terminal and perhaps stop the coal trains, to protest against coal’s role in fuelling climate change.

The rally included way-out costumes, clowns, drummers, the Radical Cheerleaders, mums pushing strollers, kids holding hands – and knee-challenged grannies like me. There would have been a lot of high bright beseeching banners but the police banned their poles.