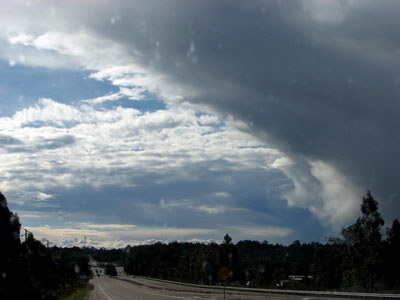 This was the sky on Saturday 22nd November, late afternoon, looking north up the Hunter Valley.

It followed an extremely windy day we’d experienced further south, but this looked more like we were heading for a hurricane – or it was heading for us!

With violent storms repeatedly hitting parts of southern Queensland the week before, a taste of the same was only to be expected.

The sky seemed to be sucking the clouds into a darkening funnel to the east yet the unusual band of crisply serrated white peaks just above the horizon remained undisturbed.

They made it appear as if, once over that final hill, we would drop off the edge of the highway into a snowy alpine landscape.

It was so spectacular I took a moving shot, through a very dirty windscreen, then felt guilty for not doing it more justice. By the time we were out of the dips and had found a place to pull over, a different skyscape presented. The Valley continued, the snowy mountains were just clouds after all. 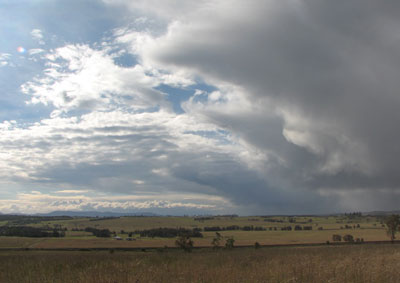 As it moved westward, the huge formation still seemed to be connected to the earth, sucking at its surface. From news pictures of American storm centres, it was easy to imagine Kansas Dorothy flying up that grey funnel – from land Oz to sky Oz.

Given that we were on the way back from a rally against coal power’s fuelling of more climate chaos – it was also easy to assume we were seeing an example of it.