The cleared slope was a fairly uniformly well-grazed green. Except for a spot of orange today.

I walked over to see what it was and found a small cluster of coral fungi blooming fleshily all by itself in the middle of nowhere.

A species of Ramaria, it would seem, or else paprika cauliflower cheese made from a rather spindly cauli. 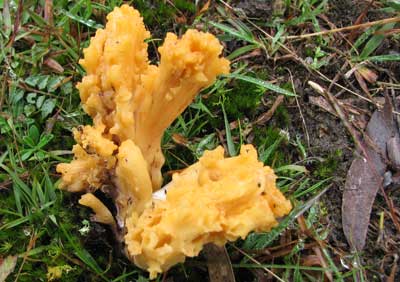 Back home another incongruous splash of orange drew me to the orchard, to the sawn-off base of a self-sown avocado tree who’d had 10 years to prove it could fruit, and didn’t, meanwhile shading my vegie patch. 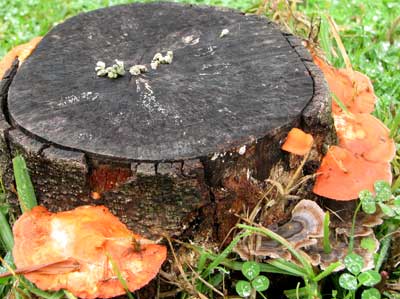 It was ringed with tough orange frilly fans, while others were elegantly striped, in less garish cream and grey and brown. I think it’s Trametes versicolor.

On top of the stump was a cluster of funny little greenish-grey nubs, like lost teeth. What they are I cannot imagine!