I’m not a ‘good flyer’, but once the panic at takeoff subsides, I am always agog at the fantastic cloud landscapes we pass, like these escarpments and plains and scudding ‘sheep’.

I’m glad to be home but the Tassie tour was well worthwhile. My ‘Rich Land, Wasteland’ talks to audiences in Cygnet, Hobart, Burnie and Launceston, combined with screenings of the eye-opening ‘Bimblebox’ documentary, left me both concerned and encouraged.

Concerned at the lack of awareness in the community, even amongst what were mainly environmentally aware people, that the resources rush was not confined to the mainland— or to the Tarkine here.

For example, it was a shock for folk to learn that New Hope Coal, who calculatedly emptied and ‘erased’ the Queensland town of Acland in advance of their open cut coalmine expansion, plan a coal-to-liquids (CTL) process for the low quality coal at their Rosevale and York Plains exploration leases.

Acland’s tragic demise is vividly shown in the film and depicted in my book, as is the Felton community’s fight against a similar dirty CTL petrochemical plant in their valley. They won, by the way.

Other larger companies, like the BG Group, (British Gas) have CSG interests here, and audiences were shocked at the map we displayed of Tasmania’s substantial CSG resources.

But I was encouraged that people took the information on board and could see that Tasmanians are well placed to use their people power to safeguard their regions before the juggernaut starts getting up momentum here.

The Lockthegate Alliance and the planned CSG-Free (or whatever-free) Communities process are achieving great results in NSW against inappropriate mining and drilling. The Lockthegate site is full of very useful factsheets and links.

Victorians have woken up to the threats to their agriculture and tourism, their water sources and their lifestyles, and are rapidly forming groups.

I hope to see lots of yellow Lock the Gate triangles when I return to Tassie. 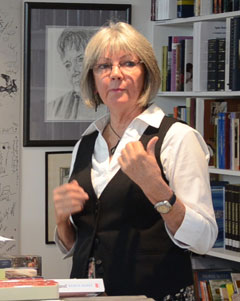 I was based in Hobart, a stunningly located and perfectly-sized city, in my opinion, and spoke once more at the terrific Hobart Bookshop in Salamanca Place, where Chris Pearce continues the best traditions of small bookshops. Long may such treasures for booklovers remain.

I did get to briefly see parts of Tasmania that I hadn’t on my quick 2010 trip. One was the beautiful Huon Valley, full of laden apple trees and proflifc waterways, when I went to the charming village of Cygnet.

And the north, past Devonport for the first time, when I drove up to Burnie to speak at the very modern University of Tasmania campus there. The Tasmanian Greens organised the talk (as they did several others), and Greens Senator Peter Whish-Wilson introduced me. Then and in our question time he spoke very well, realistic, level-headed and informed.

People here and in Launceston relate to much in my book and the film, having spent years fighting the Gunns Tamar Valley pulp mill. The battles against corporations and inappropriate and inadequately researched projects are sadly similar, with community divisions and personal health impacts. But they won that battle!

The joke used to be that Burnie was ‘Where the forests meet the sea – as woodchips’.  It was strange to see woodchip stockpiles and loaders on the docks rather than coal stockpiles.

Burnie reminded me of Wollongong and Port Kembla, with industry on a narrow strip between the sea and the high backing range.

From Burnie I took the old Penguin Road to head to Launceston for the Sawtooth Gallery’s Document://Bimblebox exhibition. 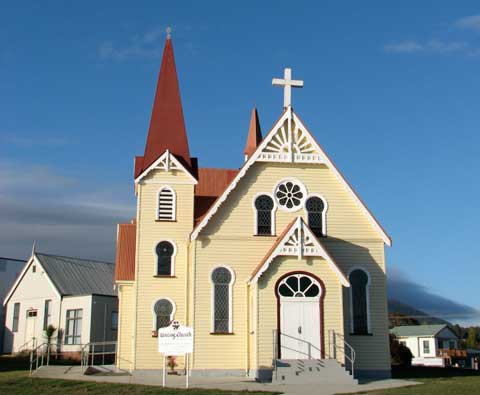 This road hugs the coast, closely shadowed by the rail line, and passes through the quaint town of Penguin. It’s gone a bit over the top with the fake penguins and penguin-linked shop names — even the rubbish bins are supported by ring-a-rosy penguins — but it did have a very cute church. Mind you, I wouldn’t have been suprised to see a penguin atop the steeple.

The route took me via Ulverstone and the rich farming lands beyond, where I was interested to see rolling paddocks of pyrethrum and learn of the poppy industry. There was a touch of Kiama and the NSW south coast here. It’s rich and productive and popular. 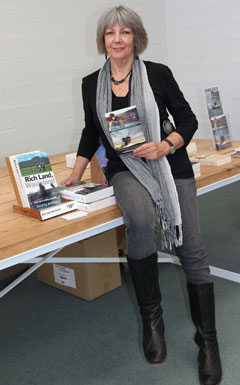 Launceston was an unexpected treat, full of gracious old buildings and good restaurants. I met up with Queensland friend Liz Mahood, who was showing in the ‘Documentary://Bimblebox’ exhibition at the Sawtooth ARI Gallery here. Liz also wrote and recorded a moving song, titled (I think) ‘Waiting for the air to clear’, from her Bimblebox artists’ camp time, and it was being played in the Gallery when I was there.

Photo courtesy of Jill Sampson, one of the artists in the Document:// Bimblebox exhibition, at the Sawtooth Gallery in Launceston until 27th April.