Not to be jolly, as we are supposed to be, but a whole mix of emotions, and mostly not even on the up scale to jolly.

Why? Because Copenhagen came so close to Christmas, and delivered such a sad affirmation of the power of the corporate and capitalist world to ignore the urgent needs of the earth and its most vulnerable nations. The gift of the rich to the poor was a callous and hypocritical thumbs-down.

It is even more despairing because leaders like Rudd and even Obama have coupled the words ‘meaningful’ and ‘agreement’ into one senseless compound word; they did not reach anything meaningful if they meant to stop global warming. It is still tokenism.

A pity the U.S. isn’t closer to sea level, or that a tsunami of reality hasn’t hit Rudd yet.

So yes, I am filled with a wide and pervasive sadness for the world, and an anger at those who are the most guilty yet the most unrepentant because they will not do what is needed to make amends; have they even said ‘Sorry’? 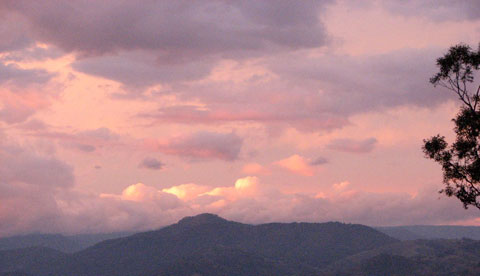 I chose this photo for my Christmas post because it holds that mix of light and dark layers which I think many are feeling at present.
For I do have hope. Perhaps it was foolishly optimistic to think that world leaders would have shaken off the yoke of their corporate masters just because the planet is in mortal danger – or not in one go.

After all, they did at least agree that they lived on the same planet.

The tragedy is that it would be so easy to cut emissions and turn our economies around to non-fossil fuels if our leaders and our politics were not so trammelled by the machinations of Big Business.

Yet we have seen some changes — some for the worst, looking at the the Abbott dinosaur party — so 2010 may move minds and generate ‘green’ as the only way to go for smart countries.

Nature always soothes me with its beauty and regenerative powers, so I offer this sky pic to my readers as my seasonal greeting.

I’d better offer it to my friends and family too, as I didn’t get round to sending even one Christmas card this year; somehow all those Santas and presents seemed a little obscene as I thought of the children of Africa, hearing from their leaders that the world said NO.

Peace and hope to you all,
Sharyn

8 thoughts on “‘Tis the season”