Older joeys, so big they are jack-knifed into their mum’s pouch to fit at all, still get to ride in comfort when they like. 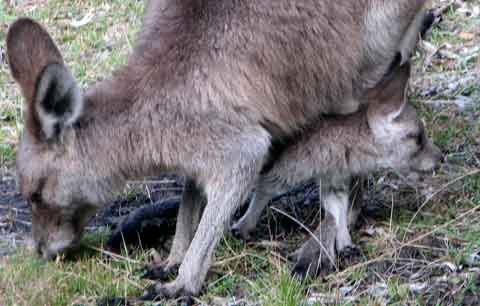 This Eastern Grey Kangaroo mum keeps feeding along, levering her large back feet forward as needed with no regard for the small feet and head that are often in the way. It’s clearly the joey’s responsibility to move.

She’s doing enough, just giving him a ride in her fur-lined carrier bag and eating to keep up the milk supply. 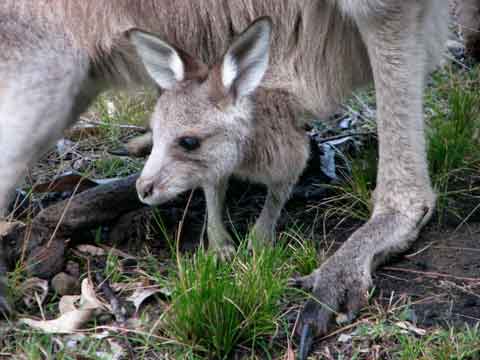 Front paws on the ground, walking with her, the joey takes a nibble of grass now and then, but mostly he’s too busy investigating the world of his Mum’s travels. Ears pricked like a puppy, he is curious about everything, in every direction.

The Wallaby, Kangaroo and Wallaroo groups that live here are endlessly fascinating. Here’s a relevant extract from my 2007 book, The Woman on the Mountain, from Chapter 4, ‘An introduction to society’.

My society is more macropod than human…

As any mother will tell you, life’s a lot easier before the kids become mobile. As the pouch-bound joey grows, it’s not unusual to see mother and joey eating in tandem, the big-eyed baby ‘practice grazing’ on what it can reach from the safety of the pouch as the mother slowly levers her way across the grass. If she stops and sits erect to check me out, the baby might withdraw until all I can see poking out are its black nose and eyes, ears hidden inside the furry parka hood of its mother’s pouch.

Bigger joeys, spending more and more time out of the pouch, each try their mother’s patience by interrupting her grazing to demand a drink of milk. When she decides that the guzzler has had enough, she pushes it aside and resumes grazing. At other times I see a mother holding her wriggling joey still with one dainty black paw while searching for fleas in the soft baby fur with the other. The joey cringes exactly like a child does when you want to wipe its face or comb its hair. ‘Aw, Mu-um!’

When the alarm goes up for the group to take flight, which they do in a very helter-skelter, every-wallaby-for-itself kind of way, these toddlers often rush to get back into the safety of their respective pouches, but it’s a terrible headfirst scramble and squeeze, and usually the mother takes off with a tangle of tail and long black feet and paws still hanging out. Or else the joey doesn’t notice her leaving, and when it suddenly becomes aware that it’s alone, goes hurtling off in any direction. Pure panic — just like any three-year-old in a department store who looks around and can’t see Mum.

As they’re allowed to remain in the pouch for about ten months, they’re quite big by the time the mothers evict them. Only then will the females give birth to the babies they had waiting in the wings, so to speak. Even with new ones in the pouch, they still suckle the expelled older joeys until they are well over a year old. New and old joey have a special teat each, from which they receive custom-designed milk. How clever is that?