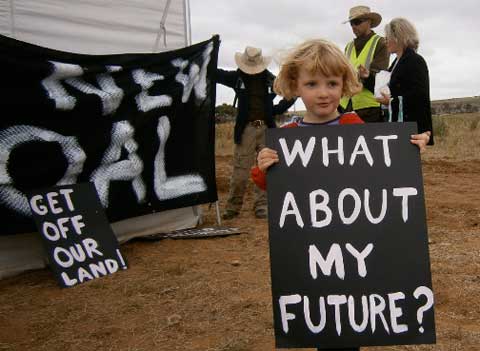 Victoria used to be all about brown coal, but only in the Latrobe, and only for the adjacent power stations. The whole world knew about dirty old Hazelwood, but all their brown coal power stations create 33% more C02 than black coal.

We also heard a fair bit about its wind power, and how the yellow-bellied parrot had stopped one progressing.

But since I was there in mid-2010, the government has changed. Mr Baillieu has dropped the target of bringing emissions down to the very low benchmark of black coal power.

He has also publicly, and I assume happily, said something like ‘Victoria could be the next Pilbara’.

This means that vast areas of Victoria are now under exploration licences for coal (brown or black) and gas: methane, however it comes, CSG, tight, shale. Often the same company is exploring for both in the same place. 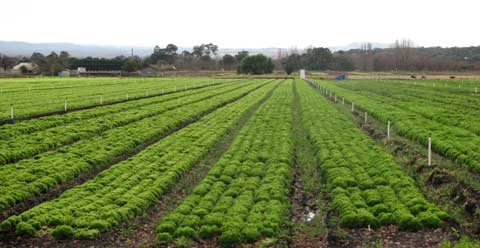 Now this looks like a good place to put a new brown coal mine. This is Bacchus Marsh, about 55km from Melbourne, on the way to Ballarat. It’s a fruit and vegetable (and herb) bowl if ever I saw one, with market gardens and orchards picturesquely lining the road in.

Grain and beef production are also important here, I’m told, but they wouldn’t look as pretty as this field of what I assumed to be parsley . 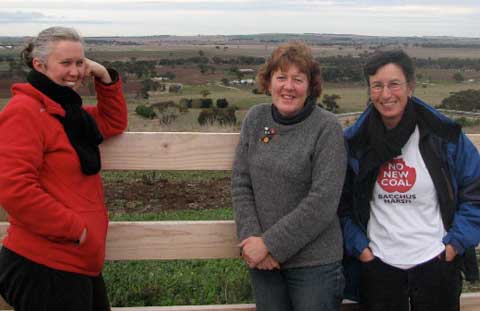 Natasha and her friends in the Moorabool Environment Group (MEG), like Deb Porter, Kate Tubbs and Liz Cooper (L to R) don’t want Bacchus Marsh to go the polluted way of areas like the Hunter Valley of NSW and they intend to keep fighting to stop it. MEG have joined Lock the Gate.

They’d been doing their best to alert locals of the threat, but since there’s long been a very small mine here just for fertiliser production, most can’t believe that the new owners plan a huge mine here.

Looking back to Bacchus Marsh township from an opposite vantage point, I imagine the ‘bowl’ edging mountains would do a good job of holding in the pollution from an open cut.

MEG asked me down to talk to locals, and showed me over the proposed site. The coal here is not like in the Latrobe, where it’s only 9m below the surface and so soft that no blasting is needed.

Here it’s under basalt and can be 70m or so down, so blasting and overburden mountains and dust and air pollution will be the lot of Bacchus Marsh if this open cut goes ahead. And who knows what will happen to the aquifers?

It’s also a major harness racing centre, and I knew I was nearing the Tubb family’s Jessamy Park, where I was to stay, by the ‘dirty’ signs along the fence. Mantle want to drill on Jessamy Park. Healthy horses, like healthy people, aren’t compatible with an open cut mine either. 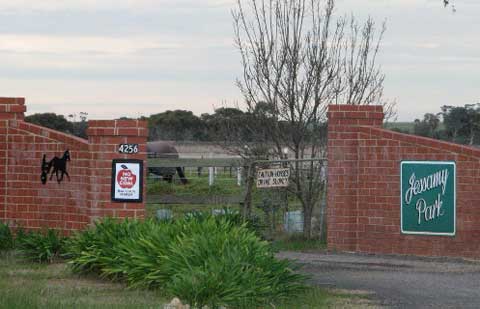 (Photo of Eleanor,top, by Liz Cooper)

After I got back home, I received this media release. I guess getting into Hansard is some sort of milestone!

1 thought on “Victoria, the next Pilbara?”