The White-headed Pigeons fly like jet planes towards their favourite highest trees, landing with abrupt but sure precision even in the mist, and often on what looks like a ridiculous choice of perch. I mean, this one must have its feet crossed to be able to clutch on to a vertical twig. Why?

Well, if impressing is the aim, it did. 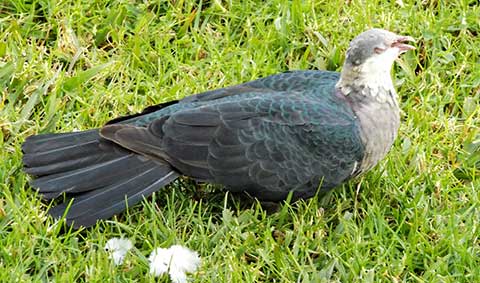 This more immature one flew like the rest, way too fast and too low towards my house roof, only he didn’t manage to veer up and over in time.

Bang! Mad flapping and rolling, shedding small feathers, fluttering and staggering off the verandah to rest on the grass.

He did not look well.

Up so close, the stunning iridescence of his ‘black’ back was evident.

Lacking the full white head and chest he will have when grown, he nevertheless had the daredevil nature down pat already. Had to be a speed-loving, risk-taking juvenile male.

But would he survive? 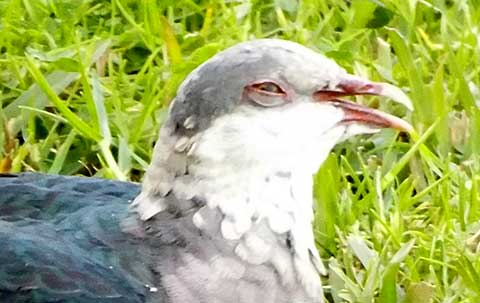 Thnakfully he hadn’t broken his neck, but he must have been in shock.

Meanwhile, the rest of the flock were blithely wheeling about and showing off across the creek flat.

After about half an hour’s rest, body not moving at all, beak open, eyes mostly closed, I feared I would soon see him keel over.

Was the pink blood? No, I read, beaks and eye surround are reddish.

I began to think of where I could bury him.

Then, without even trying out his wings, he simply took off. Up and away, no obvious harm. 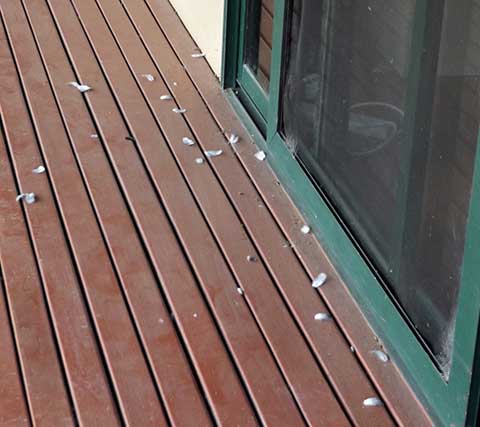 All that was left were the few breast feathers from first impact.