The steps to my verandah gate also lead to a dry patch on the top step. This has been claimed by a wallaby who sits there and surveys the soggy world. Only when I appear does she skid off, leaving tail and claw marks and several fat leeches. 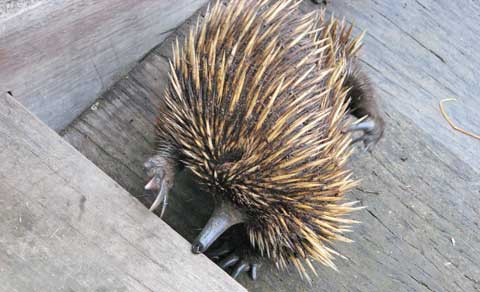 Yesterday, as I approached the gate, I saw another of my wild co-tenants climbing up the open steps. An echidna was easily bridging each gap, stopping on every step to scratch.

It was dislodging actual lumps of mud as it did so. Clearly a very muddy major excavation had taken place, as mud was sprinkled all over its back, dotting its spines; the bigger lumps must be in between them. 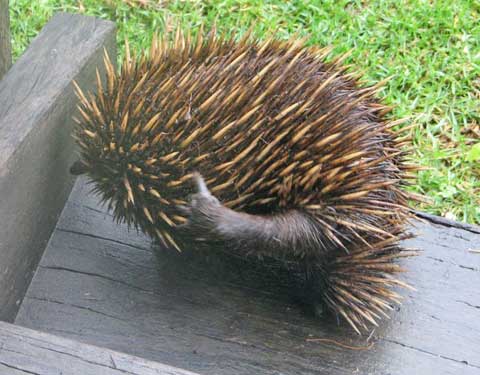 I wondered if an echidna can shake itself when dry, or is that special long claw the only way of cleaning?

The echidna reached the dry step, walked along it, and began descending at once. Whether it was just inquisitive, or whether it was disappointed in whatever it had hoped to find? 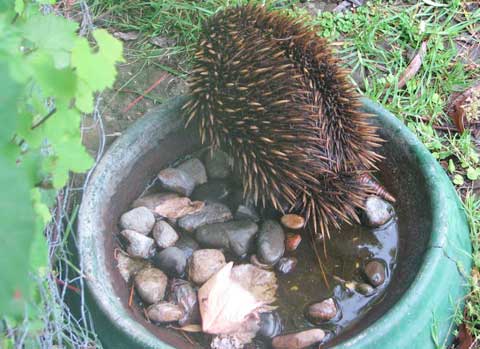 It stopped for a last scratch on the bottom step, then hopped off and waddled through a dish full of stones and water… why?  As so often, I wished I could ask, and they could answer.