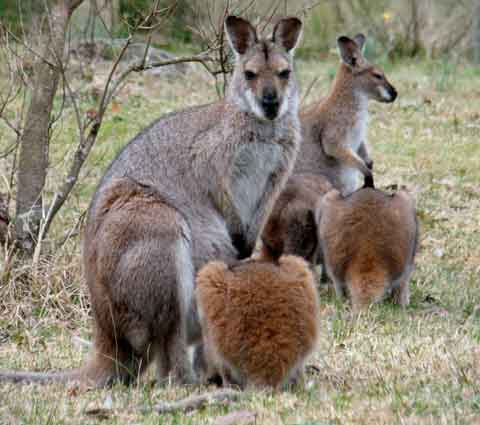 Morning tea time here at Hoppy’s Playgroup and the mothers must stop eating my garden so the youngsters can have their milk. These aren’t the equivalent of babes in arms; they are big joeys, who, as I’ve noted before, can be almost as big as their mothers.

They graze, but must have their milk too, and the mothers patiently prop and let them poke their faces into the pouches and drink their fill, passing the time dozing or scratching or washing their paws.

This wallaby lot looked like the queue at the canteen.

But as the joeys grow, the capacity of those pouches is stretched to extraordinary limits. 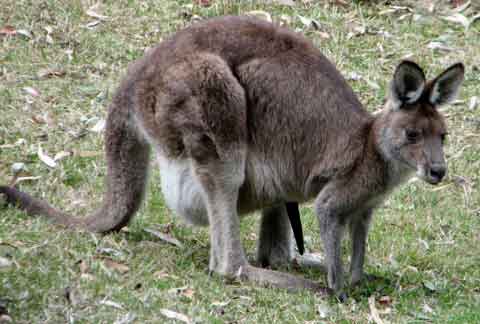 I had to look twice at this kangaroo. A randy young male? But the penis was too thick, too dark, too straight.

No, just such a big joey that its tail wouldn’t fit back into the pouch.  I do often see the long hind feet and a thin tail tip poking out of wallaby pouches, but there are fewer roos so I wasn’t used to the scale of this one.

I can still feel the kicks in the ribs and the elbows in the guts from babies too long in utero myself.

Just imagine a big joey diving in, nose first as they do, then trying to turn 360 degrees, scrabbling about with those long pointy — clawed — hind feet and very solid tail.

All I can say as I watch the wildly contorting pouch is ‘Ouch’!

4 thoughts on “A mother’s lot”