The latest unthinkable area to be targeted by the coal mining frenzy is the world-renowned wine and food area of Margaret River in south-west Western Australia.

A town, a river and a region, it is one of that state’s main tourist destinations, offering a Mediterranean climate and a combination of surf coast and scenic hinterland as settings for rich and varied cultural and gastronomic experiences. 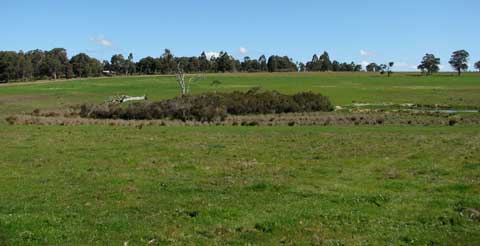 This is the mine site on Osmington Rd, near Rosa Brook, 15km from the actual town of Margaret River, and a much-visited and picturesque part of the Margaret River region, with wineries, dairies, berry and olive farms, equestrian centres and charming rural B&Bs, like the owner-built Rosa Brook Stone where I stayed.

LD Operations is currently applying to mine coal underground here; other exploration leases await. As you can see from the swampy centre, it’s clearly a wet area, despite, as locals say, a dry winter.

It is inconceivable that they will be able to mine without damaging the aquifer, although I am sure they will find experts to assure us that this would be ‘unlikely’. 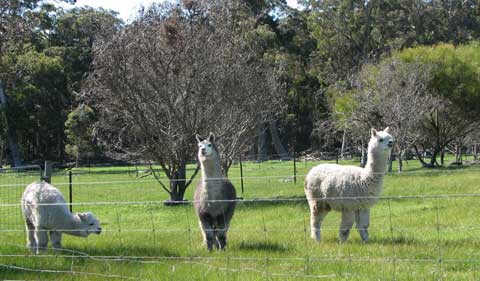 The visible neighbouring farmhouses are modern, new-ish; they weren’t expecting this. Nor were these inhabitants of the adjoining lifestyle block. 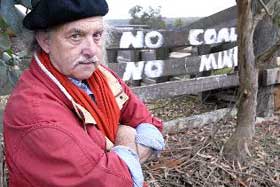 Locals like TV chef Ian Parmenter (left) and Brent Watson have formed a strong NoCOAL!itionmargaretriver group to fight this entirely inappropriate mine.

Ian Parmenter and his wife Ann moved here 20 years ago, building a haven — home and garden and orchard and vineyard — over that time. Brent Watson and his family run the highly successful Horses and Horsemen equestrian resort and training centre just down the road.

They have the support of the local Council, winemakers and tourism associations and notables such as James Halliday. Local member Troy Buswell says he’s agin it, but Premier Colin Barnett has finally stated that he is not about to step in and deny LDO their ‘due process’

And we all know what that portends.

Because I was visiting Collie, only two hours away, Ian asked me to speak at a public meeting the day before I headed home. About 70 people turned up at the Rosa Brook Hall to hear about what I’ve seen in coal areas in other states and were audibly shocked at the Rivers of Shame DVD shown afterwards. As a reward, I was treated to a Parmenter feast of a dinner — vegetarian, in my honour!

I know these good people had very full lives and livelihoods before this mine threat exploded and I know how much time they are now spending on trying to save them — and the future and water resources of the whole region. This is a huge part of the unfairness I see all around the country. I hope they can last the distance — and win — as all reason and justice say they ought.

If Mr Barnett is not thinking of the southwest’s water and longterm land use, he might like to think about this, which I’d read before this whole mining madness became public. It’s was in The Weekend Australian Financial Review May 22-23, 2010, ‘How space and place dictate your happiness’ by Deirdre Macken. She reported that Glenn Albrecht, Professor of Sustainability at Murdoch University, had studied the Upper Hunter’s existentially distressed coal mining area populations, where ‘everything they valued was being taken away, … shovel by shovel’.

He became interested in finding places that work best for people, ‘health-enhancing environments’, and he and urban planner Roberta Ryan of Urbis independently agreed that  ‘the place in Australia that best captures the qualities that please the psyche is the Margaret River.’

Says Ryan, ‘It’s the most extraordinary place… and it just feels like the most fantastic place to be. It helps that it has an incredible level of investment by locals and so the locals feel as if it’s owned by them.’

Which is why they won’t be allowing Mr Barnett to allow the mining company, under his rubber stamp legislation, to take it away from them — and the rest of us.

6 thoughts on “Wines, not mines, in Margaret River”