Many of you will recall my several posts on Bimblebox, the Nature Refuge in Queensland’s Galilee Basin that Clive Palmer wants to dig up for his China First mine. (See Outback Eden under threat and Speak up for nature)

Now there’s a film about its plight — but not only about this one precious place.

It’s hoped to be Australia’s Gasland, to wake up the city and the country and add to the growing popular rejection of this mindless resources rush, set to ruin Australia, as it is ruining the lives of so many Australians.

DVDs are currently being prepared, and the film is available for screenings. 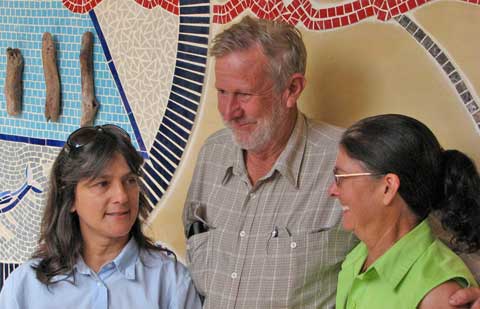 I saw it at the premiere in Byron Bay in March, were I was delighted to meet Paola Cassoni, (left) one of the caretakers of Bimblebox, and driving force behind this film, and to re-meet Lindsay and Avriel Tyson, with whom I’d stayed at their Springwood property, under serious threat from the neighbouring Xstrata’s Rolleston mine. See my posts When the neighbours get pushy, Coal floods? and Blackening the Golden Triangle.

Avriel’s segment in this film is extremely moving.

All three feature in my new book, Rich Land, Wasteland — how coal is killing Australia.

2 thoughts on “Bimblebox and beyond”