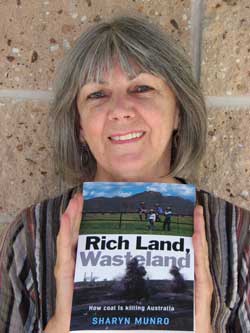 Last Friday I collected a special parcel at the post office: my copies of the new book!

After two years, it’s reality, quite a hefty reality at 453 pages, but that includes the many references. It’s half as many words again as my first book, and in a larger format.

The cover looks great, and despite the size, the pages flip easily. So a great production job by Macmillan, following on from Exisle.

Both teams are working hard to promote it, as they are right behind the need for Australians to know of the urgency and gravity of this issue.

I think maybe at last I do feel proud of it, as people keep telling me I should; until now I’ve just been relieved to have survived to finish it! Cathy Smith took the photo.

I understand from Exisle that copies are already being sent to those who pre-ordered online.

I possibly need to explain that I don’t have (or own) the books myself so I can’t sign them, but bring them along to any talk I give near you and I’ll write in them for you.

So that was the white side of the day. 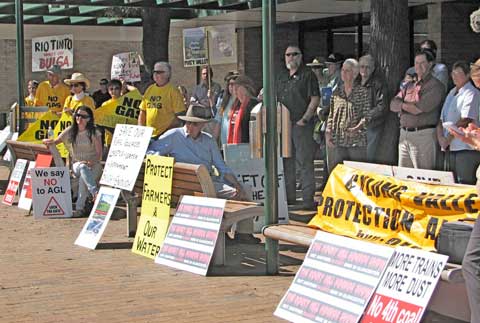 At 11 am I had to be at a rally outside Singleton Civic Centre, where a public forum was to be held on the Coalition’s  Strategic Regional Land Use Plan. About 300 people were there, bearing signs expressing their concerns and their wishes, like ‘AGL go to hell!’  Merriwa, Putty, Bunnan, Bylong, Bulga, Jerrys Plains, Gloucester… all fighting for their futures. 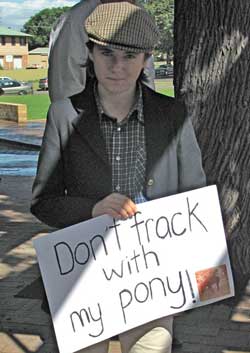 Nobody was happy about the quite insultingly glib ‘plan’ which broke just about every promise made before the election.

That became anger and frustration in the actual forum as Planning Minister Hazzard in particular seemed to dismiss so many concerns in a manner that to me seemed quite patronising.

Apparently he can’t exclude or ‘ringfence’ areas from mining or drilling because they could be changed at a whim later; why not do it anyway, as Murray Armstrong asked, while they get their plan finalised. And why, I ask, can’t they legislate so they’re not subject to whims? 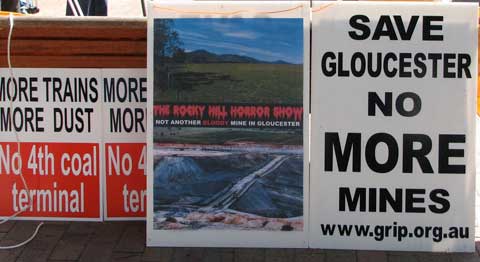 It would appear that obvious defects in the mapping were news to him: like no mention of a viticulture industry cluster for Upper Hunter wineries; almost nothing worth protecting, so needing to go through the ‘Gateway’ process, in the Gloucester Valley, nor on the cropping and grazing lands of Merriwa.  It seemed like deliberate sacrifices of some areas had been made to coal and gas.

Farmers and residents stressed that Cabinet needed to realise this that was a matter of survival, to be aware of the ‘mental anguish’ of people forced into this daily battle against coal and CSG, and the critical importance of surface and groundwater to farmers. If they don’t, who knows where will it lead?

The feeling was that Planning was looking after the mining companies; there was no confidence in ‘answers’ given to the limited number of questions able to be fitted in. Surely more than two hours could have been allowed?

But would they listen anyway?

Everyone needs to have their say officially by making a submission by May 3rd.

Submissions can be lodged online, by email or by post to
Director, Strategic Regional Policy,
Department of Planning and Infrastructure,
GPO Box 39
SYDNEY NSW 2001

7 thoughts on “Friday 13th: a black and white day”