Last Tuesday I and a bunch of other people from all walks of life and areas stood in hot sun outside Singleton Court House, or retreated to the shade behind for respite.

We held up home-made signs and chanted ourselves dry while the media recorded our anger and frustration: ‘No NuCoal!’ — ‘Save our Water, Save our Land!’ — ‘Enough is enough!’

And at one stage, a spontaneous ‘Where’s George Souris?’ chant arose, George being the sitting State National Party MP. (In case you don’t remember, the Nationals used to be the party who looked after rural interests.)

Why were we there? Because inside that Court House, Jerrys Plains cattle farmers Ian and Robyn Moore were battling it out against NuCoal Mining, after unsuccessfully ‘negotiating’ with them since July 2010.

Ian is legally blind; he can only work his farm, inherited from his father, because he has known it for so long. He couldn’t cope with new obstructions like the exploration drilling, couldn’t move to another property and he wouldn’t be able to farm here, blind or not, if NuCoal happened to wreck his underground water sources. Going to the Land and Environment Court was the final step, armed with an independent water study that cost the Moores around $50,000. And of course there’ll be the legal fees.

While the hearing proceeded, outside the building, speakers from other areas, like Deidre Oloffson (right) from coal-trashed Camberwell and Stuart Andrews (left) from coal-threatened Bylong shared their concerns. Hunter Communities Network’s Bev Smiles and Lock the Gate’s Drew Hutton kept the talk and the chants flowing.

Two days were set aside for the hearing, but by the end of Day One the judge had come to a decision

Although the holes on alluvial soils were denied to NuCoal, the Moores were ordered to allow the three others on higher ground.

The Moores are devastated and not sure what they will do next.

Their supporters may have been a motley lot but not ‘the rabble’ as NuCoal’s senior counsel described us. Like the Moores, we were standing up and speaking out for the future of farming and rural communities in Australia.

If social licence to proceed means anything, inside that court NuCoal would have been in no doubt they have none. 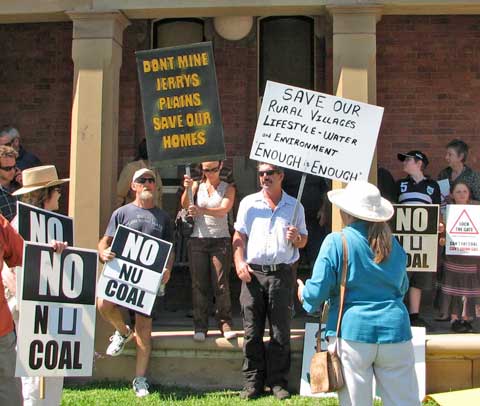 However, ex-Minister Ian Macdonald, currently being investigated by ICAC for an alleged piece of naughtiness, approved that mine in rather whiffy circumstances.

Soon after the Moores’ day in court and the good media coverage of the ‘rabble,’ the government has asked NuCoal to suspend operations until the ICAC result is known.

1 thought on “Bullying the blind?”