Recently I visited a friend who lives at Bundeena, a small coastal village surrounded by national park.

This happens to be the second oldest national park in the world, after Yellowstone — and it’s only 32 kilometres from the Sydney CBD.

Having been lost amongst Metroads that didn’t use to be there, and highways that didn’t look the same, and having to stop and phone for directions several times, I finally skirted around Sydney and entered the Royal National Park. Established in 1879, this gem was foreign country to me, as in all the years I’d lived in Sydney, I’d never been there.

I drove through coastal rainforest up to the spectacular orange tangles and twisted limbs of Angophora costata forest, and on to a wind-sculptured coastal heath.

It was low, but the right height to block any views to beyond, so felt like driving through a maze.

Only at one spot could I see across the water — and there was Sydney city, its spires and towers rising through its own slightly murky haze.

So close, but a world away. 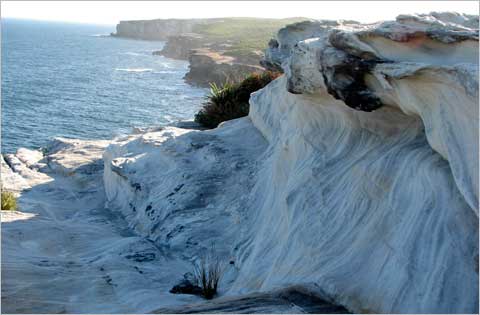 A very short walk from the leafy suburban world of Bundeena led us to the sea edge, a long rugged row of cliffs that must have looked extremely inhospitable to any ships in trouble in early days. 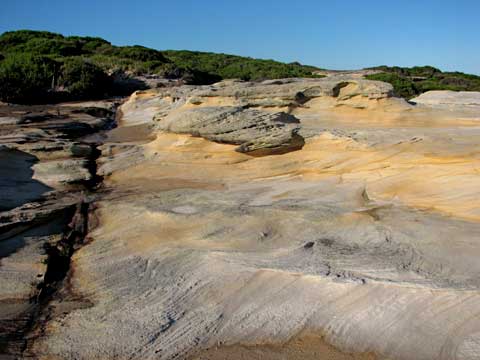 The wind-wrought rocks were stunning; Sydney sandstone sculptures at their best. 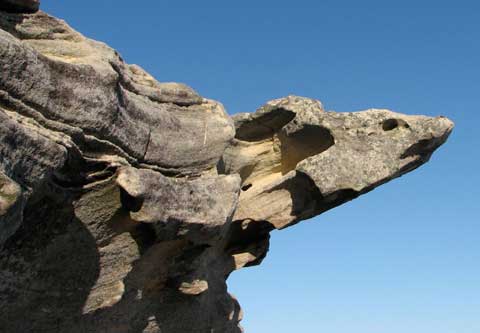 And what land needs watchtowers or gun emplacements when such fierce stone creatures face the sea as guardians of the land?

It was fortunate that I had that one brief seaside walk, as I took a fall next day and was hobbling about on a stick for the remainder of my visit.

I shall have to return to this unexpectedly wild edge of Sydney another time, try to keep my balance for longer, and meet more of its creatures.