January has been very hot, up to 36 degrees here — of  course interspersed with odd days where it plummeted to 13 degrees. It’s not called ‘climate chaos’  for nothing.

Outdoor work needs to be done before the day heats up too much, in my opinion, so I aim to be up around six and work for a few hours or until the sun hits wherever I am. Then I have earned an appetite for breakfast, the right to stay inside and write, and the comfort that things out there aren’t getting too far beyond my management.

There are no horses here any more, as my daughter has them at her place now. So I am gradually removing the tree guards in the yard, collecting the last of the precious manure, weeding around the fruit trees, and attempting to prune broken or munched shrubs into less distorted shapes. 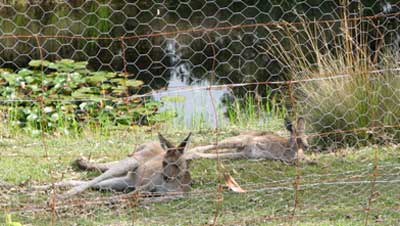 Working very close to the yard fence the other day, I noted a kangaroo family stretched out on the grass right beside the wire, just above the little dam.

Despite the fact that I had my small and crackly portable radio on and was clipping and clacking and clanking with my tools and the ancient wheelbarrow — they stayed put as I worked towards them. 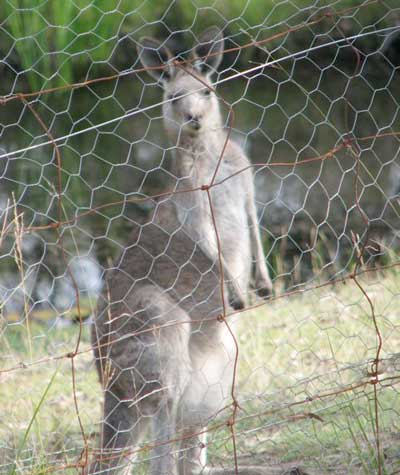 I went to get the camera. The biggest stood up when I returned and aimed it;  the other two didn’t bother. An ear flicked, a head raised, an itch was scratched. The sun grew warmer; the kangaroos dozed — carefree in their Wildlife Refuge.

Such are my rewards.