I have some new tenants: a family of maned wood ducks. As often happens with my wild neighbours, they took up residence in the house yard when I was away.

As always happens when you’ve been away, there’s lots of washing to do; as I went to hang it out on my simple wire clothesline, there was flurry of movement down near the fence as five wood ducks waddled off from the hydrangea bush to new shelter.

Of course I went for the camera and snuck about. Of course they flew up and over the fence to the dam. It seems the magpies are allowing them tenancy there too, which is a first.

Each day I see them in different places of the yard. This morning they were right outside the steps, and took off in a great flapping fuss when I sleepily emerged. 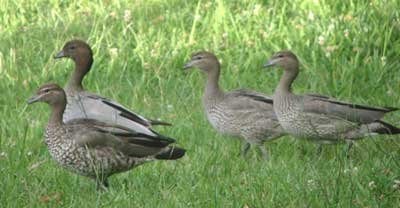 Because they are so shy it’s hard to be sure, but I think the family is composed of a male and female and three almost grown young.

The male has the plain brown head; the female two white stripes around her eyes and more dappled plumage.